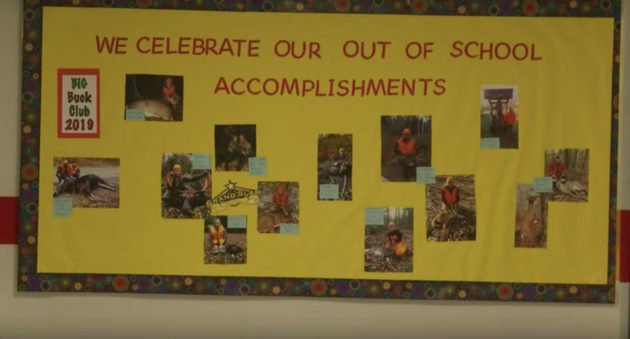 Whitefield Elementary School now has a bulletin board where students can post photos of the deer they harvest.

As hunting numbers continue to dwindle–largely because the youth is collectively losing interest–many of us wonder if the end of an era is near.

However, in many of the more rural regions of the United States, you would never know participation was slipping, as so many communities embrace their deep-rooted heritage during hunting seasons.

One of those communities is Whitefield, Maine, where the local elementary school has actually created a bulletin board where kids can share photos of the animals they harvest, which include game animals such as deer, turkey, bear and moose.

Students K-8 are all allowed to participate in the fun, which has brought the community together, according to employees like physical education teacher Jamie Simpson.

She says teachers are getting involved, too, and that everyone is using the board responsibly, although there is one rule everyone has to follow.

“We started our bulletin board a few years ago and kids were posing with guns and their games,” she told NEWS CENTER Maine in an interview. “We have a no-weapons policy at school. So the kids were also taking their photos without their weapons with them as long as they can still have their photos posted.”

Two seventh graders, Caleb Bishop and Olivia Brann, actually completed grand slams this year, which means they each harvested a deer, a bear, a turkey and a moose in the same season.

“I like the bulletin board,” Bishop said. “If we kill a big deer or a big bear, we’re able to talk around to our friends.”

In addition to being able to show off her hard work in the woods, Brann has also had the opportunity to show her classmates a different side of herself.

“A lot of people think because I’m very ballet and I like to dress up and stuff in dancing, when I say I’m a hunter, people are like ‘Wow!'” she said.

To raise the stakes even higher, the school awards a prize to the hunter with the heaviest buck each year. Brann’s 9-year-old sister, Cassidy, took first-place honors last year with a 10-pointer.

While hunting recruitment seemingly continues to struggle, small towns like Whitefield are laying down one brick at a time.