The sun was beating down out of a clear sky, but a cool breeze against my left cheek kept the heat down. It had been a wet spring, and tall bunches of bright green, tasseled grass dotted the steep mountainside. My eye was pressed against the lens of the spotting scope, staring intently at one particular tuft of grass. It was stirring and bending slightly to the left, which didn’t compute with the breeze I was feeling on my face. I twisted the dial to widen my field of view and studied the ravine running at an angle right to left just in front of the square steel target.

“Shooter ready,” said Hillary Dyer. She was locked in a comfortable seated position, her rifle resting on sticks, and had already dialed her scope for the range I had given her: 560 yards.

“Spotter ready,” I said, and paused briefly, considering. “Hold half a minute right. Send it!”

I saw the bullet strike the steel target before the satisfying clang came back to us. “Impact! Nice shot!”

We had been working together for two days, alternating shooting and calling each other’s wind first on the range and now in the field, and we had become a good team. As students at the Outdoor Solutions Long Range School near Coalville, Utah, our shared goal was to sharpen our shooting skills under the watchful eyes of expert instructors. Head instructor Erik Lund had been standing close by, watching our approach to the 560-yard target. Now he spoke up.

“Excellent work,” he said. “The wind on this one is tricky, with that ravine in front of the target funneling the breeze from right to left. Were you able to see the trace on the bullet through the spotter?”

As we discussed the shot and the various factors at play, Erik reminded us that every long-range shot is a process. It’s crucial to work through every step of that process: Determining the range. Determining the drop, in MOA. Adjusting for the range, whether dialing a scope turret or using holdover. Judging, and adjusting for, any wind. And, of course, the basics of making any shot, long or short: building a solid shooting position, controlling your breathing, and pressing the trigger smoothly without putting any extra “energy” into the rifle. Erik had guided us through this process the day before, as we shot from benchrests on a thousand-yard rifle range, and now that we had moved into the field to engage targets at unknown distances, he had stepped back to let us work through it on our own. We found that it was becoming second nature.

Taking long-range shots at game animals is a contentious and controversial subject, but shooting an accurate rifle with good optics at steel targets out to 1,000 yards is, quite simply, a blast. Even so, I was here for more than just the fun factor—I wanted to improve my field-shooting skills with hunting in mind. While I have no intention of ever attempting a thousand-yard shot at a game animal, I knew from previous experience that the more trigger time I could log on long-range targets, the more confident and accurate I would be at normal hunting ranges, and, in addition, I would likely extend my personal range envelope, at least slightly.

This was exactly what founder Greg Ray had in mind when he founded Outdoor Solutions Long Range Schools in 2012. As a longtime hunt booking agent, Greg saw a need for practical, hands-on training with factory rifles and gear, an approachable and affordable class for the average hunter, and he developed his curriculum with that in mind.

“We would often book hunters from the East Coast or Midwest who were avid whitetail hunters and wanted to experience the West and the game it has to offer,“ he explained.  “When we would prepare clients for their hunts and explain that they needed to be prepared to shoot out to 400 yards, they would respond with disappointment because they did not have the knowledge to shoot that far.”

But why train all the way out to 1,000 yards if you never intend to shoot that far at game? “We don’t advocate shooting animals at that distance, even though there are shooters and equipment that have the ability to hit targets consistently at that distance,” Greg said. “Ethical distances vary from shooter to shooter, depending on the conditions and equipment being used. Our goal is to teach hunters not only to shoot to 1,000 yards and beyond but to understand how they did it, so they can repeat the process on their own. Once they are confident at the longer ranges, when a 300- to 400-yard shot presents itself, they will know exactly what to do and have the ability to make an ethical shot. When they take that knowledge to the field, it will result in fewer wounded animals, more meat in the freezer, and happier hunters.

“We get a lot of students preparing for big hunting trips, such as Africa,” he added. “Many families and parent-child teams attend our courses in preparation for hunts they’ve booked.”

“Our goal is simple: To make you a better shooter,” Erik had told us when we first arrived. “We aren’t trying to make you into a sniper or competitor; we just want to start from wherever you are now and help you improve your skills.” 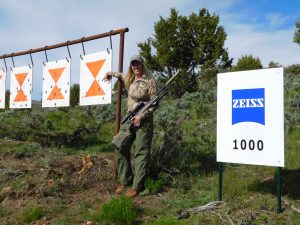 Hitting a steel target at 1,000 yards is a great confidence-builder for any shooter.

Classroom time was kept to a minimum—only a couple of hours of introductory material on the first evening. At the range on the first day, the instructors gave us hands-on training in basic zeroing, using ballistic apps, the use of riflescopes (both dialing turrets and holding over), wind and mirage, proper benchrest position, and trigger management. On day two, we applied all of these skills in the field, refined our field positions, and learned proper methods for shooting off sticks, packs, and improvised rests.

The team of Outdoor Solutions instructors includes, in addition to Erik, Director of Training Steve Aryan and Lead Instructor Ryan Long. “There are a ton of good shooters out there, but that does not necessarily translate into a good instructor,” Greg said when I asked him what he looks for in a great shooting instructor. “We look at temperament and attitude; you will not find attitudes or egos with our instructors—they love teaching as much as our students love learning. They are great with beginner students who haven’t even purchased their first rifle yet, or they can go down the rabbit hole of the most technical aspects of long-range shooting if that’s what a more experienced student wants.”

Outdoor Solutions runs schools in three locations: Texas, Utah, and Michigan. I attended the Utah school on a sprawling ranch situated at an elevation of some 7,000 feet. The six students in my class paired up and spent the first day on the ranch’s 1,000-yard range, first getting sighted-in and comfortable shooting paper targets from benchrests at 100 and 200 yards, watched closely and assisted by Erik, Greg, and Ryan.  Once we were dialed in, we began engaging steel targets at 100-yard intervals, gradually gaining confidence and increasing the range by working through Erik’s “process.” In late afternoon of the first day, all six of us—including one student who had no previous rifle-shooting experience—had hit the thousand-yard target several times.

Day two was even more fun. I enjoy shooting from field positions far more than shooting from the bench, and early on the second morning we climbed into four-wheel-drive pickups and headed into the ranch’s backcountry, where steel targets had been set up a various ranges, sometimes in devious locations with tricky thermals or steep angles. Our shooting positions sometimes had downed logs or brush that could be used for a rest, but just as likely we’d be forced to shoot from prone off a bipod or sticks, or improvise a rest with packs and jackets. It was excellent practice for the realities of Western hunting.

When a brief thunderstorm temporarily chased us off the mountaintop and back to the range, Erik gave us another challenge. First we’d shoot at a target at 400 yards by dialing our scope turrets to account for the drop. Once we made a hit, he would call out a different target—say, 600—and we were required to find and hit the target using the reticle to hold over instead of dialing the scope. The drill entailed some on-the-fly math and helped ensure we understood, and could use, both methods.

As we wrapped up our second day of shooting, I mentioned to Greg that I had a Wyoming antelope hunt booked for the fall, and I was feeling a lot more confident about my shooting. He smiled and asked me to drop him a note after the hunt to let him know how it went. “That is truly the reward for what we do,” he said, “hearing back from hunters who go through our training and who later go on a big-game hunt and have a great success story to tell us when they return.”

The rifles we used for this course were Remington 700 Magpul Enhanced in 6mm Creedmoor, equipped with bipods and Jaeger 30 suppressors, and loaded with Barnes Precision Match 112-grain rounds. The rifles were topped with Zeiss 6-24×50 Conquest V4 scopes. The use of the Zeiss Hunting App to set up a ballistic profile was an integral part of the course. I had no previous experience with a ballistic app, but I found it remarkably easy to use after downloading it for free on my iPhone. Integral to this system is the very impressive Zeiss Victory RF binocular, which actually syncs with the smartphone app. Once you have loaded your ballistic profile into the bino, a touch of the button on the binocular tells you not just the range, but your holdover in MOA. I’ve used several brands of rangefinding binoculars in recent years, and the Zeiss is fastest and most responsive I’ve used. The binos also have a built-in weather station, which will automatically update your MOA, if necessary, based on the barometric pressure at your location.

You can bring your own rifle and optics to Outdoor Solutions courses, and the instructors will help you set up your system and fine-tune it. But most students opt to learn on the rigs provided by the school, which are always factory hunting rifles using factory ammo.

“Many people think you have to have an expensive $10,000 custom rifle setup to consistently shoot precise shots out to 1,000 yards,” Greg said. “Each one of our students will hit the 1,000-yard target during the first day using standard factory rifles, optics, and ammunition. It’s great to see their smiles when they hear the ringing of steel.”

Outdoor Solutions offers their two-day, three-night Long Range Schools in three locations around the country: Texas, Utah, and Michigan. Overnight accommodations and meals are included, as well rifles, ammo, optics, and expert instruction in both the fundamentals of shooting and more advanced skills. The basic course costs $2,500. Visit www.outdoorsolutionscorp.com for details or call 918/258-7817.—D.R.