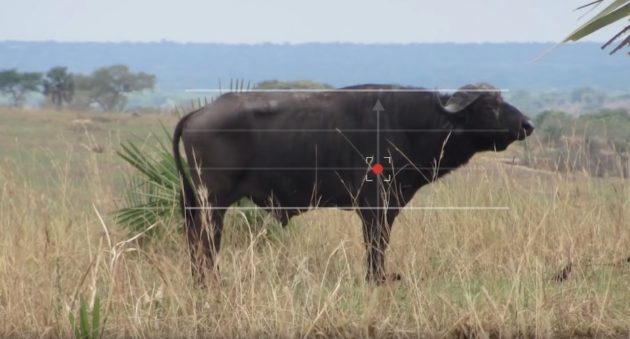 Nothing will mess up a cape buffalo hunt faster than a poorly placed shot. Here’s what Craig Boddington has to say about cape buffalo shot placement.

Cape buffalo have a well deserved reputation for toughness and aggression. They also have the ability to soak up incredible amounts of lead from poorly placed shots. The good news is that they aren’t bullet proof and a properly placed bullet from a heavy hitting rifle will bring them down.

Craig Boddington is an extremely experienced hunter who has a lot of time afield in Africa hunting all sorts of game, including plenty of buffalo. So, it’s certainly a good idea to listen to what he has to say.

Watch the video to see his thoughts on exactly where to shoot a cape buffalo.

A charge is the last thing anybody wants on a cape buffalo hunt. While bad shot placement won’t necessarily result in a charge, it certainly has the potential to do so. At a minimum, it will result in much more stress for you and your professional hunter.

As long as you pay attention to what Boddington was saying in the video and practice shooting under realistic conditions before your hunt, you’ll probably be fine. This applies regardless of whether you’re hunting with a .375 H&H, a .375 Ruger, a .416 Remington, a .416 Rigby, a .458 Win Mag, a .458 Lott, or something else.

No buffalo will go very far if you put a well constructed bullet where it’s supposed to go.

If you keep those things in mind and take your preparation seriously, things will probably go as planned on your cape buffalo hunt.

On the other hand, things can very rapidly go sideways out in the bush if you don’t.