Farewell to an African conservation visionary 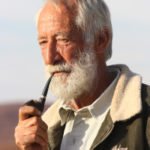 Garth Owen-Smith lost his battle with cancer on 21 April 2020, and so ended the life of an extraordinary man who has left an indelible mark on the practice of wildlife conservation in Africa. For 53 years, from his first visit to Namibia in 1967, Garth devoted his life to changing the way in which wildlife policies and attitudes to rural communities were implemented.

Colonial attitudes and philosophies brought to Africa saw rural Africans as ‘poachers’, to be pursued and punished by the equivalent of the European ‘gamekeepers’, whose job was to protect the ‘Royal Game’ within the areas designated for their protection. In this way most rural Africans were alienated from wildlife and denied access to the wild resources that they had traditionally utilised for centuries.

Garth Owen-Smith’s story was published in African Hunting Gazette 23.2 in 2017. His early years in Namibia (then ‘South West Africa’, administered by South Africa since 1921 after World War I) were characterised by ongoing friction with government officials who regarded rural communities as incompatible with wildlife conservation goals. Garth’s view was that unless these same communities were treated as legal custodians of the wildlife they lived alongside, there was no hope for nature conservation in Africa. His philosophy was articulated in a seminal article entitled Wildlife conservation in Africa: There is another way!, published in Quagga # 17 (1987), the journal of the Endangered Wildlife Trust.

r the years, Garth suffered considerable deprivation and hardship, but stuck firmly to his convictions. With his anthropologist partner, Dr Margaret Jacobsohn, steady headway was made, which escalated rapidly after Namibia’s independence in 1990. The new regime was very supportive of the notion of communities having ownership and responsibility for the wildlife on their land, and the concept of ‘conservancies’ was widely implemented.

By 2017 there were 83 registered conservancies in Namibia, covering 163,000 square kilometres of land, over which wildlife was now managed as a valuable and sustainable resource through tourism, live game capture and sales, subsistence hunting and trophy hunting. Today Namibia leads the African continent in its enlightened wildlife conservation policies, which have ensured the increase in numbers of rhinos, elephants and a myriad other species that have benefitted from the conservancy concept.

It is not often that individuals can play a major role in shaping far-reaching national policies, but Garth-Owen Smith was one of them, and we salute his legacy and his memory with gratitude and appreciation for a life truly well-lived.

Dr John Ledger is a past Director of the Endangered Wildlife Trust, a consultant and academic on energy and the environment, and a columnist for the African Hunting Gazette. John.Ledger@wol.co.za