Francolins – A Rose by Any Other Name 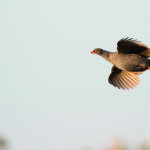 You’d think with birds this ubiquitous, the “experts” could come to an agreement. That doesn’t seem to be the case.

Sitting on my desk are five of the most universally accepted and highly regarded books describing the birds of southern Africa. I’ve looked up in each of them the species of birds similar to the Hungarian partridge common to North America and Europe. In trying to determine the commonly accepted names of the dozen or so most familiar of these gamebirds, there is no consensus.

Some books refer to them as grey-winged or red-winged francolin, others as greywing or redwing francolin. This spelling difference is not an unforgiveable offense, so let’s not get too concerned about it. The real problem  lies in the fact that some books describe these two species as partridge, not francolin, reserving the francolin name for a list of other specific species. Unfortunately, the confusion doesn’t end there.

Take the widely distributed bird of the dry savanna named for the English ornithologist of the early 1800s, William Swainson. Two of the reference books refer to this bird as a Swainson’s francolin, two others as a Swainson’s spurfowl. Keep in mind that each book describes both francolin and spurfowl distinctly, so it’s not just a case of them using the terms interchangeably. No, the fact is there seems to be little concurrence on which birds should be called francolin, which should be referred to as spurfowl, and which are partridge.

To further confound the issue, it appears that the scientific names for these birds, the Latin-based Genus and species names you see printed in italics, have also changed in recent years. Don’t worry, I won’t bore or confuse you by describing how these names have changed. What’s important to understand, however, is that scientific names are used, in part, to specifically identify a species for the expressed purpose of eliminating the potential confusion caused by regional differences in common names. When scientific names change, as they can and do for legitimate reasons, one of the unintended consequences can be a furthering of the incompatibility as to what the accepted common name will be for any given species, at least until all the reference books and field guides catch up. Often, the laymen on the ground, in this case hunters, outfitters and PHs, never do become “current”; like most of us they’re creatures of habit.

Of course, at the end of the day, most within the hunting community would say that all of this confusion surrounding what we call these birds is much ado about nothing. After all, in the field, when you’re swinging a well-balanced double on a hard-banking bird, neither your guide, your tracker, the dog handler or even the bird dog gives a hoot about what you call that winged target, nor whether you spell its name with or without a hyphen. All they care about is that you dust the bird they’ve worked so hard to put in front of you.

No matter where you hunt in the popular areas of southern Africa, from Tanzania to the Cape, there is one or more of these species available. (For our purposes here, I’ll call them all francolin, as that’s the name for them I learned on my first African safari more than 30 years ago.) They’re common and widely distributed birds that you’ll undoubtedly encounter whether hunting the peaks of the Drakensburg Mountains, stalking the thornbush of central Namibia, or walking the miombo woodland of the Selous. Most often, hunters,  focussed on more important game, note them only in passing. That is until a knot of francolin flush noisily from underfoot when you’re closing the distance on a buffalo or kudu, scaring you half to death and simultaneously alerting the animal you’re hunting that something untoward is afoot. At those times, francolin are considered little more than a nuisance.

What many are missing, however, is how sporting francolin can be as game birds. I’m constantly surprised  by how many hunters, even wingshooters, overlook francolin, focussing instead on doves and pigeons, guineafowl or geese. And it’s not that you shouldn’t pursue those species, but rather that it’s well worth the effort to dedicate some time to francolin.

The crown prince among these birds is the grey-winged partridge, often regarded as one of the premier upland birds in the world; they’re spoken of in the same sentences and with an equal reverence as the renowned red grouse of the Scottish highlands or the robust capercaille of Eurasia. Greywings make for a physically demanding hunt, as they’re generally found in montane grassland habitats above 5000 feet. That makes for lots of ups and downs as, even in the best habitats, coveys are generally widely dispersed. These hunts are invariably conducted behind well-trained pointing dogs and, while you may be forewarned of an impending flush, uneven footing and the greywing’s tendency to flush downslope makes for challenging shooting. You earn every grey-winged partridge you manage to collect.

While you have to make a dedicated effort to find and hunt greywings, and their close kin, redwings, most other francolin are found in the same habitats where you’d typically hunt big game. You’ll encounter them across an array of habitat types although they’re predominantly associated with arid bushveld, savanna or grasslands, often adjacent to gullies or dry riverbeds.

On a recent hunt in central Namibia, the leopard gods were smiling on us and we finished earlier than anticipated. With time on our hands we elected to dedicate a day and a half to hunting birds, including red-billed francolin. These birds are widespread across Namibia and Botswana, and can also be found in northwestern South Africa. They’re reluctant fliers by nature, preferring, much as Hungarian partridge do, to run and hide beneath thorn thickets. We didn’t have a lean and graceful pointer at our disposal, so we engaged the next best thing, our PH’s rambunctious Jack Russell terrier. What he may have lacked in bird dog refinement he more than made up for in hell-bent enthusiasm. Whenever we’d see a redbill or two scuttle into a thornbush, we’d send Bushy in after them. Invariable they’d flush, offering a shot or two. It proved to be great sport and an enjoyable and relaxing way to spend time after the intensity of hunting leopard.

On a hunt in Limpopo in 2018, we  hunted Swainson’s and crested francolin behind a brace of fine English pointers. Over two days we experienced hunting that rivals the best upland bird hunting I’ve enjoyed anywhere, with 20 to 25 flushes each day.

As noted, some species of francolin would rather run than fly when pressured. This split personality is largely responsible for the conflicting stories you hear about hunting them. Certainly dogs, particularly pointing breeds, are a huge asset whenever you’re hunting francolin, but the dogless hunter can also enjoy fine sport if he’s determined. Admittedly, in bushveld habitats hunting francolin without a dog can be difficult. Where they’re found in grassland habitats, alternatively, they’re much quicker to flush, and if you’re willing to put in some miles on your boots, the gunning can be both rewarding and fruitful.

Some species get an undeserved bad rap, and francolin appear to be one of them. My advice is to not listen to rumor and innuendo, but hunt them and see for yourself. Their meat is absolutely superb and the shooting can be terrific; what more could you ask of a game bird?

As to all confusion about whether to call any given species a francolin, a spurfowl or a partridge, I guess we’ll all just have to wait until the scientists and those who write the bird identification books to reach some sort of agreement. Until then, perhaps Shakespeare said it best. Does not a rose by any other name still smell as sweet?