Game Animals of the World 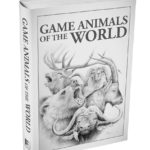 Game Animals of the World

by Chris and Mathilde Stuart

African sunsets do not linger. Measly seconds exist between comfortable shooting light and pitch black darkness that is better suited for a hunting leopard. But right on cue my first wild gray duiker oozed from the Raisin bush and cautiously stepped out into the rapidly fading yellow, red, and beige pastels of the Kalahari Desert. I saw what certainly appeared to be a slim profile of horn and whispered to professional hunter, Wayne Cilliers, “Is he a shooter?” Wayne exhaled a disappointed sigh, “It’s a ewe, not a ram.” Chagrinned over my blunder, I hung up my bow and was left with nothing more to do than watch the animal anxiously dip her muzzle into the waterhole. More experienced hunters of the Dark Continent know that female duikers possess a tall tuft of hair between the ears that to me appeared short and hornlike in the oncoming darkness. A more careful review of an outstanding volume such as Game Animals of the World would have certainly prevented my greenhorn mistake. Retribution accompanied by far better identification skills fortunately arrived several nights later and a trophy duiker ram now adorns my den.

Despite my embarrassing duiker gaffe, I honestly labor to be a student of the natural world. I have grown to adopt the notion that the only stupid question is the one that is not asked. That being said, there is no excuse for the bowman not to become an amateur naturalist whether hunting at home or abroad. Game Animals of the World will thoroughly school the traveling hunter with an abundant glut of knowledge on game species here or abroad.

Much ground has been covered, and in some cases fairly trampled, regarding trophy species available in North America and Africa. Game Animals of the World by its very title must include the animals of those popular continents. However, in this 330 page volume the authors also allow us to romp across South America, Europe, Asia, and the South Pacific. A complete perusal of this book will arm the traveling hunter with a comprehensive tutorial on both the well-known and the seldom addressed huntable species.

For bowhunters, the trophy is in the eye of the beholder. One’s Holy Grail may be an Argali sheep but for another it may be a wolverine. Delightfully, this is both the relevance and intrigue of Game Animals of the World. No single species is given marquee status although for the reader’s ease of navigation the authors obligingly divide the book between major and minor huntable species. While giving the Greater Kudu all the respect it rightfully deserves, a hunt for the Gray Ghost opens the door to appreciate the lesser known species that may very well tempt the archer to draw his bow such as caracal, steenbok, or jackal.

I found Game Animals of the World to be quite user friendly. Each species has two pages devoted to its basic physical description, geographic range and map, favored habitats, behavior, and preferred food sources. A sidebar includes its name in four languages along with these germane statistics: age of maturity, weight, height, longevity, gestation, number of young and rutting seasons. A generous number of quality photographs are supplied allowing the reader to study the physical appearance of both male and female specimens. Examples of tracks are included which are helpful to not just the solo hunter at home but also for those who dare to shadow competent trackers abroad.

A clearly defined shot placement diagram is displayed for each species. Therein is found the only weakness of this volume regarding its practicality to the hunting archer. Although a heartshot on a javelina is applicable for bow and rifle hunters, a frontal shot on a Cape buffalo is not. Rifle calibers and ammunition are also recommended. Wouldn’t it be wonderful to see suggested arrow weights and broadhead selections in such a volume? However, bowhunters are and forevermore will be the minority of hunters so it comes as no surprise that this book and others of its kind favor the rifleman. This minor critique should in no way dissuade bowhunters from acquiring Game Animals of the World. The extraordinary amount of information contained within certainly compensates for its nod to the gun hunter.

Contained within the book’s index-beside each animal’s name-are found both the Rowland Ward and Safari Club International minimum scores for that particular species. For those interested in above average head gear or skull size at the conclusion of a successful hunt these numbers are a useful point of reference. The introduction of Game Animals of the World presents a reasonable case to promote the pursuit of trophy animals while never compromising respect for the game and the process of ethical hunting. Bowmen should find their own quantum of solace in the book’s dedication-

“To all the real hunters of the world to whom the chase is of the essence, and more important than the result. To whom the well-being of nature supersedes personal exaltation.”