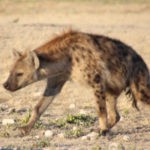 The brown hyena, Hyaena brunnea, is a species found in Botswana, Mozambique, Namibia, South Africa, and Zimbabwe.  It is currently the rarest species of hyena.  Brown hyenas average 34 to 55 inches in head and body length.  They run 28 to 31 inches at the shoulder.  The average adult male weighs 88 to 97 pounds.  There are no significant size differences between the male and female.  Unusually large animals can weigh as much as 160 pounds.  Interesting fact: about five million years ago there was a species of hyena that weighed 450 pounds.  This mega-scrounger could crack elephant bones.

Hyenas have relatively short bodies and large, strong chests and neck.  They somewhat resemble wolves, but have very distinctive hindquarters that slope down towards the rump.  Their forelegs are longer than their hind legs.  The brown hyena runs with a unique gait, seemingly crippled as it streaks after prey.

Brown hyenas have powerful jaws.  Within five minutes of birth, young hyenas can crack the leg bones of an impala. This ability disappears as hyenas age and their teeth dull and wear.  Brown hyenas have a society similar to wolves, with both an alpha male and an alpha female.  They maintain a stable group hierarchy by engaging in mock fights and aggressive displays.  Female brown hyenas typically produce their first litter when they reach two years of age.  Mating happens from May to August.  After a 97-day gestation, a litter of one to five cubs are born.  Unlike spotted hyenas, the brown hyena cubs are born with their eyes closed and remain that way for eight days.  All adult members of the group will bring food back to the pups, which spotted hyenas won’t do.

Brown hyenas get most of their food from scavenging carcasses brought down by larger predators like leopards, cheetahs, and jackals.  They will eat just about any animal protein including, but not limited to rodents, insects, eggs, and fruit.  Brown hyenas have been observed chasing leopards off kills and treeing the leopard.  Sometimes lions and spotted hyenas will be seen hunting brown hyenas and killing them.

When the brown hyena has an excess of food, it will hide it in holes or in shrubs for up to one day.  They are poor hunters and seldom catch live prey such as spring hares, foxes, or springbok lambs.  In the Kalahari Desert, brown hyenas are active most of the night searching for food over areas as large as 34 square miles.  Their powerful sense of smell allows them to locate carrion as far as one mile downwind.

Spotting, walking, or stalking the likely habitats is the best way to locate the animal. Identifying the sex of the hyena is somewhat difficult as the genitalia of the female resembles that of the male.  If there are other hyena around for comparison, then the larger brown hyena is probably the male. (Except for the spotted hyena where the female is larger than the male.)  Watch for vultures in the air over a kill.  Where vultures or marabou storks gather, usually hyenas are present.  Trophy measurement is judged by skull size, so shoot the largest one you can locate.  Any rifle that is used for plains game will do.  However, wounded hyenas can be extremely dangerous, so make double sure that the brown hyena is really dead.  Ammunition is much cheaper than plastic surgery. 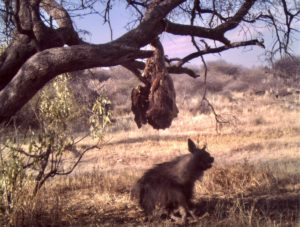 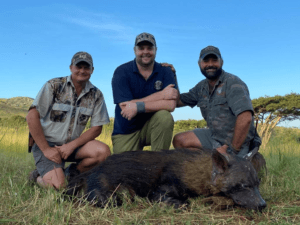 The striped hyena Hyaena hyaena, is a species native to North and East Africa, along with populations in India and Asia.  The global population is thought to be near 10,000 animals, but due to human interference, habitat loss and hunting, the animal could be facing a ten percent drop over the next few years.  The striped hyena is the smallest of the hyenas with the mature male weighing between 50 pounds and 120 pounds and standing 24 to 30 inches at the shoulder.  Its senses of smell and hearing are weak, but it has excellent eyesight.

As with other hyenas, the striped hyena has extremely powerful jaw muscles and can crack an antelope thigh bone easily.  It is a nocturnal hunter, leaving its den only when the sun is fully set.  It’s primarily a scavenger, hunting dead animals, and it’s not terribly concerned about the state of decomposition.  Sometimes it will eat entire bones, but normally it will crush them into small pieces, and then consume them.  About the only animal it won’t eat is the vulture, possibly because of professional courtesy – one scavenger to another?

The striped hyena lives in dens. Sometimes it will dig its own, but it will use caves, overhanging rocks, dirt channels and burrows dug and abandoned by warthogs, aardvarks, and other animals. The easiest way to detect a hyena’s den is by the animal bones around the entrance.  The hyena hides in deep cover during the day to avoid periods of extreme temperature and to keep out of predators’ sight.

The striped hyena will attack any animal it thinks it can subdue.  It attacks by sinking its teeth into the groin area and pulling out the internal organs, causing the prey to die.  The striped hyena will scavenge leopard, cheetah, and other cats’ kills.  It can win in one-on-one encounters with cheetahs and leopards, but avoids lions.

There are a number of methods that can be used for hunting the animal.  Spotting with optics; tracking to the den, and stalking can result in success.  During the day, scan for vultures in the sky; where there are flying scavengers, the hyena will be close by.  Or use bait and build a blind as if you were hunting a cat.  In countries where it’s legal, hunting at night using spotlights can be very successful.

Identifying gender can be quite difficult.  Usually, the largest animal is male.  However, one can quite easily shoot a female.  The best trophy is judged by skull measurements.  Aim for the biggest head you can find.

The spotted hyena, Crocuta crocuta, is a species of hyena native to sub-Saharan Africa.  It is sometimes called the laughing hyena due to the sounds it makes similar to human laughter.  When you are hunting and hear one for the first time, you will think there’s a crazy person out there in the bush.  The spotted hyena has the largest clan sizes and the most complex social manners of all the species.  Its social organization is more similar to baboons than carnivores.

The spotted hyena is very vocal, producing any number of sounds including grunts, groans, giggles, yells, whines, and its ubiquitous laugh.  When attacked by lions or dogs, it will defend itself aggressively.  The male spotted hyena stands 27-36 inches at the shoulder and weighs 90-120 pounds.  Females are larger at 97 to 141 pounds.  Exceptional specimens can weigh upwards of 200 pounds.

The skull of the spotted hyena is much larger than that of other hyena species.  Combined with its large jaw muscles, it can exert over 1,000 pounds per square inch of biting force.  Spotted hyenas have been observed cracking open giraffe bones to get at the marrow.

The species dwells in partial deserted areas, open woodlands, dense dry woodland, and mountainous forests up to 11,000 feet in altitude. It is scarce or absent in rain forests and coastal areas. Its preferred habitats in West Africa include the Guinea and Sudan savanna, and is absent in the belt of dense coastal forest. In the Namib desert, it occurs in riverine growth along seasonal rivers, the pro-Namib and the adjoining inland plateau. In ideal habitats, the spotted hyena outnumbers other large carnivores, including other hyena species. However, the striped and brown hyena occur at greater densities than the spotted species in desert and semi-desert regions.

Territory size varies dependent on location.  In the Ngorongoro Crater in Tanzania, the spotted hyena range is roughly 25 square miles, while in the Kalahari Desert, the range can be as much as 600 square miles.  Clans are very defensive of their territories.  They defend through vocal displays, scent marking and perimeter patrols.

Spotted hyena groups are known as clans.  These clans can contain up to eighty individuals of both sexes. Females are dominant.  Even the lowliest female is dominant over all the males.  Spotted hyena clan dominance is passed on down through the female side of the family; dominant mother passes responsibility down to daughter.

Spotted hyenas can breed any time of the year, but it is more common during the rainy season.  Gestation length varies but averages around 110 days after which one to four cubs are born.  Cubs are born with their eyes open and will attack each other shortly after birth.  The weaker cubs are killed.  Survival rates for cubs vary, but only 75% live through the first month.  Spotted hyenas reach sexual maturity in three years.  Life expectancy in the wild is seven to nine years.

The rifle to use when hunting spotted hyena is the same rifle used for plains game hunting.  Anything in the .270-.300 caliber range will work well.  Shot placement should be right behind the shoulder and one-third of the way up the body.  The methods used when hunting are stalking, spotting and walking, or the more productive method is to use bait and build a blind.  The sex of spotted hyenas can be very hard to determine.  If there are other hyenas around look for the one with the largest head.  Trophy judgement is biased on skull size, so take the largest one you can find.