Is the capybara South America’s most interesting animal?

Among other regrettable traits, I have a terrible addiction to taxidermy. I’m trying to curb it, but I have some pretty cool stuff in my house. Visitors don’t exactly ignore the big cats, the African antelopes, or the sheep and goats, but there’s one animal that, consistently, almost everyone asks about. It’s a life-size capybara, perfectly mounted by the folks at The Wildlife Gallery in Michigan, and it looks like a giant-size guinea pig. Which, in fact, it is!

The capybara, locally called carpincho, is by some margin the largest rodent in the world, potentially weighing over 150 pounds. The orderRodentia, with outsized front teeth for gnawing, is large and diverse. Like the familiar guinea pig and hamster, the capybara has a very short tail and completely oversize head. Size-wise, no other rodent approaches it. Next in size is the paca, also a South American animal, but the paca isn’t even a quarter the size of the capybara. Semi-aquatic, the capybara lives along waterways, lakes, and estuaries from northern Argentina up through the Amazon Basin. It does not extend up into the isthmus of Central America and is not found north of the Panama Canal. Surprisingly, its smaller cousin, the paca, extends into southern Mexico, so is technically both a South American and North American animal. Ground-burrowing and very nocturnal, I hunted paca in Mexico’s Yucatan. It’s an interesting animal (and also very tasty), but not nearly as cool as the capybara.

Hunting always depends on time and place. (Ideally, through planning, you put yourself in the right place at the right time.) However, luck is always a factor, so difficult animals can come easy, and common animals can come hard. The old saying, “never look a gift horse in the mouth” is totally true, but when success comes easy the overall experience suffers, and so does knowledge. So it was with capybara. 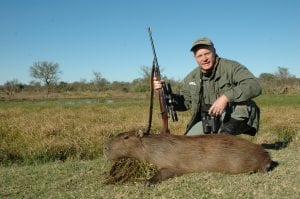 Boddington shot this medium-sized capybara in Argentina’s Santa Fe Province in 2008 and had it mounted.

Back in 2008 I was hunting in Argentina’s northern Santa Fe Province with Marcelo Sodiro. Of course, I wanted a capybara. The area didn’t have large numbers of them, but they were certainly present. Early in the morning we hunted along waterways with hounds, hoping to catch capybaras out in the brush. This was fast-paced hunting: When the dogs lit up, the capybaras would head for water, so the game was to race ahead of the chase and catch them before they reached their sanctuary. I shot two that way, one with a buckshot-loaded shotgun and another with my 7×57. Both were good-sized capybaras, and it’s the larger of the two that I have mounted. I agree with my occasional visitors: It’s one of my favorite mounts! However, those two were the only capybaras I actually saw, so that chapter closed with me knowing almost nothing about them. 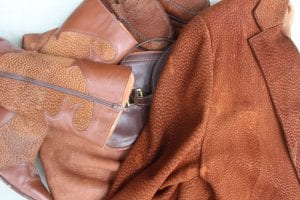 Most shops in Argentina will have an assortment of carpincho leather products, from handbags and wallets to packs, footwear, and jackets. The distinctive pebble-grained leather is nearly waterproof, usually showing marks from fighting. Capybaras for leather are generally farmed for the purpose, not hunted in the wild.

Well, not exactly nothing. I knew of their affinity for water, I knew their meat is highly prized and tasty, and that their hides make awesome leather that is pebble-grained and essentially waterproof. Carpinchos are widely farmed for both meat and leather, and throughout Argentina (and elsewhere in South America) you can find footwear, handbags, jackets, and more made from their attractive and distinctive leather. Rarely are the skins perfect. Capybaras fight viciously with those razor-sharp teeth. The leather shows distinctive scars, and when we were hunting with hounds I was urged to shoot quickly and decisively to avoid risk to the dogs.

In March 2019 I was again hunting with Marcelo Sodiro’s South American Adventure Safaris, a complex trip that started in the north with some dorado fishing and bird-shooting, and finished down in Patagonia where the red stags were roaring. The second stop was at Malalcue Lodge in the northern Corrientes Province, where my hunting partners and I hunted free-ranging axis deer and blackbuck. Area manager Sergio Wizensky, who I’d hunted with before, let slip that the ranch we’d be hunting was overrun with capybaras.

Most hunting in Argentina is for introduced species, but, subject to seasons, a few native species are still huntable, including brocket deer, peccaries, and capybara. Sergio told me that, if we had time, we could hunt capybaras and perhaps find a really big male. Regrettably, native game can no longer be exported, but I was still intrigued. I wouldn’t have another one mounted anyway—and I wanted to learn more about this strange animal.

It was a sweltering midday and we were fruitlessly stalking blackbuck in tall grass. Rains had been generous and the low spots had formed into small lakes or lagoons. So, sweating and searching for small antelopes swallowed up by the grass, I glassed along the shore of a lagoon and saw the first of a dozen capybaras slipping along the edge. As the day went on we would see more, near almost every pond or stream. The place really was overrun with them! Later that day we got really lucky and shot a very fine axis deer, so the capybara hunt was on. 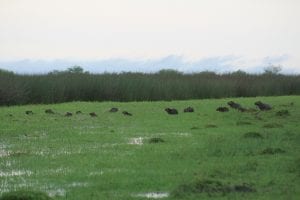 Capybaras gather in family groups or packs. I count fourteen in this photo, but there were actually over thirty in this pack.

Capybaras typically form into herds or packs; a dozen to twenty is common, but along one swampy area we counted more than thirty in one group. Having never seen them in the wild, I was struck by how rodentlike they really are in appearance: At a distance they reminded me a lot of prairie dogs. Water, however, is constant. They will never be far from it, spending much of their time partially submerged. When alarmed, they will immediately head for deeper water, splashing in much like a pod of hippos.

This was fascinating but, remember, our mission was to find a big male—and that’s where my real education began. When looking at a group it’s pretty easy to tell which ones are larger than most of the others. It’s also easy to see which ones are alone, and which are obviously mothers with young. However, as with many rodents, the females are often larger than the males. Obviously, there are no horns or antlers, and in grass or water, evidence of sex is always completely hidden. Typically, the dominant male will be at the edge of a pack, often a few yards away. However, the only surefire tell-tale sign is tricky: The males have a raised oval bump on the snout just in front of the eyes that the females do not have. With age, this bump becomes more prominent and almost hairless. Marcelo and Sergio have lived with capybaras their entire lives; with binoculars they could instantly pick out a male at two hundred yards. I could not!

On this ranch they are hunted little and were quite calm, and eyesight appears not be their strong suit. Combining these factors, we were able to closely approach several groups. Sergio and Marcelo painstakingly pointed out males, always off to the side, but I had to look carefully at several before I “got it.” The bump is definitely there, but you need a side profile or frontal view to see it, and even then it’s subtle, but once you see it you get the idea.

In this unusual place, finding capybaras was not an issue, so we made a number of approaches, turning down a number of males that were judged too young or not big enough. Fortunately, I wasn’t doing the judging. After a few trial runs I could see the bump, but I needed my local experts to tell me when we found the right one.

We got within a hundred yards and then I stood on sticks for an eternity, waiting for him to turn and offer a shot. He finally did, and he was indeed a very big one. The gauchos were happy: Carpincho is a real delicacy! 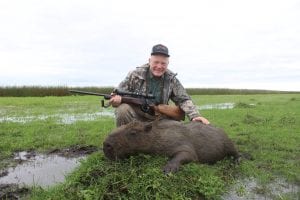 A big male capybara, taken in Corrientes Province in northern Argentina. Like bears and boars, the capybara is a dense animal, heavy for its size. I think this one probably weighed about 140 pounds. The nose bump is very obvious on this animal.