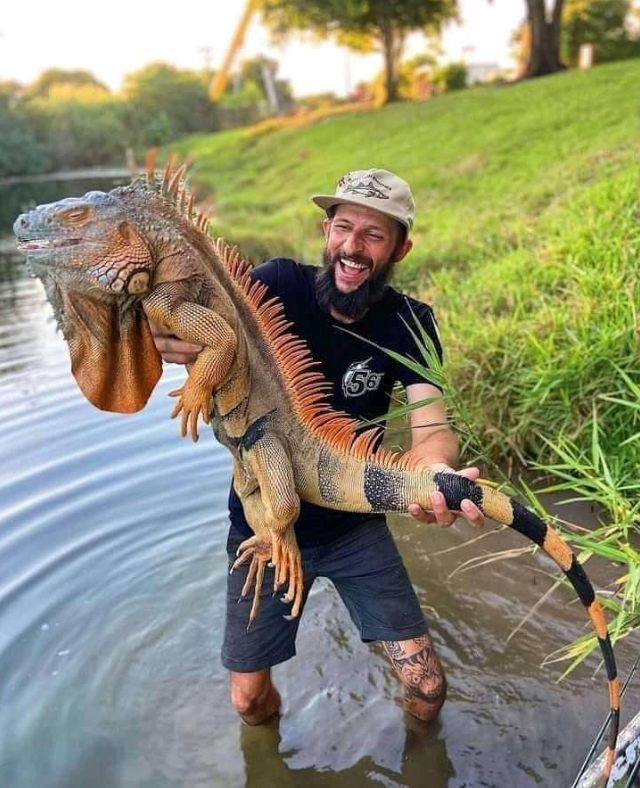 Mike Kimmel with his biggest iguana to date. Mike Kimmel

Invasive green iguanas have been spreading through Florida for years. The lizards, which come from Central and South America, have powerful tails and sharp teeth and claws. They lay clutches of 14 to 76 eggs, and once they grow to two feet long, they have almost no natural predators. In parts of Florida, iguanas have become so abundant that they can be seen dashing across roadways and sidewalks, swimming in canals and ponds, and climbing trees in residents’ backyards. They swim well in both salt and freshwater, and can stay submerged for up to four hours. Iguanas dig massive, interconnected tunnels with multiple entrances. Such tunneling can undermine roadways, sidewalks, trees, patios, waterfront shores, and home structures.

Florida lists iguanas as an invasive species that can be hunted year-round with no limit. And that’s where iguana hunter Mike Kimmel and his Drahthaar, Otto, come to the rescue.

Kimmel has been hunting iguanas for about a decade, and in recent years he’s been hired to eliminate lizards in municipalities, on golf courses, residential properties, and anywhere else they become a nuisance.

“We’ve definitely had a positive impact on removing iguanas from cities, parks, and private properties,” says Kimmell, 33, who operates Martin County Trapping & Wildlife Rescue. “But the large and winding canal system in South Florida is loaded with iguanas, and that’s where I take paying hunters for a day of environmental cleanup.”

Kimmel guides up to four paying hunters for iguanas on public canals. Clients pay $1,000 for the shooting adventure. He provides all gear, and hunts from a large jon boat or pontoon boat. Clients use specialized .30 caliber air rifles because their limited range makes them safer in urban areas. They’re still plenty deadly on iguanas, though. The goal is to shoot the lizards in the head.

“A typical harvest in a 10 a.m. to 4 p.m. iguana guided hunt is 20 to 50 lizards,” says Kimmel, who lives in Indian Town. “I’ve had days where I’ve personally shot up to 90 iguanas when hired by a town to remove them from a golf course. We’ll also shoot other invasive species like Egyptian geese, Muscovy ducks, and sometimes monitor lizards.”

Florida’s infamous pythons aren’t typically encountered during an iguana hunt, Kimmel says. Invasive pythons are mostly found in the Everglades. However, Kimmel’s prowess in capturing these giant snakes has earned him the nickname: The Python Cowboy.

Kimmel’s dog Otto is often the star of these iguana hunts, as the two-year-old canine is skilled at catching and retrieving shot lizards. Kimmel also has two more dogs he’s training with his girlfriend Allie to use for iguana hunting. The large lizards are well equipped to defend themselves, which Otto is used to by now.

“A big iguana uses its muscular tail to whip an adversary, and he’ll bite and claw,” says Kimmel. “They try to bite Otto’s ears when he chomps down on them. But he’s learned to shake them and kill them fast.”

Most green iguanas Kimmel shoots are two- to four-feet long, and his biggest to date is a massive 6-footer that weighed 18 pounds. Kimmel shot that lizard last year on a golf course and has it mounted. He brings the mounted lizard with him when conducting environmental education sessions at schools, fairs, and sportsmen’s gatherings.

Kimmel uses all parts of the iguana. He regularly eats them and says they’re delicious. All lizards are skinned and tanned, and the leather is used for making wallets, purses, even pistol holsters. Heads and claws of large lizards are made into trinkets for tourists.

Shooting iguanas in urban areas can alarm some folks, and Kimmel does have to deal with irate residents from time to time.

“Usually, I can talk and explain to them what we’re doing and why, and they’re okay with that,” Kimmel says. “But sometimes they still call the police, who are required to show up because it’s reported that a gun was seen. When the police come, they see it’s me, and they usually just wave and leave. Sometimes they come over and scratch Otto and see how many lizards we’ve taken. The police understand and endorse removing invasive species.”

Kimmel says that in addition to the environmental damage iguanas do to property, they also displace native Florida wildlife.

“Because they dig huge tunnel complexes, iguanas regularly move into ground nesting areas used by South Florida’s endangered species, such as burrowing owls and gopher tortoises,” he explains. “That’s a real problem for those prized native animals, and another reason to remove iguanas.”