Which bass species is America’s favorite?

When it comes to freshwater fish, arguably no two game fish species are more popular than the largemouth bass and the smallmouth bass. These two iconic fish are probably near solely responsible for the recreational fishing industry being as large and successful as it is today. Both bass species have a wide range and put up an excellent fight.

This begs the question: “Which black bass species is the best?” Well, that is a matter of opinion, but we will attempt to come to some sort of conclusion to the question of smallmouth vs. largemouth today.

We will quickly look at the differences between these fish. We will also look at the records anglers have set targeting them. Let the great fish debate begin!

This species of bass is one almost every angler knows. Micropterus salmoides is a certified eating machine. Sometimes called “bucketmouth” for their gaping jaws, these fish will swallow just about anything they can fit into their mouths. That includes birds, mice, lizards, frogs and more. Their usual diet primarly consists of crayfish, sunfish, shad and other small bait fish. When water temperatures are warm, they can be extremely aggressive, crushing everything from jigs and crankbaits to topwater lures with a stunning ferocity. It is because of that excitement that bass fishing has become so popular.

That aggressive, non-picky feeding style makes the largemouth bass incredibly hardy. As a result, they are distributed across much of North America. However, they have been successful introduced to other parts of the world like Europe, Japan, New Zealand and even South Africa. While they thrive in large lakes and rivers, they can also survive small creeks, ponds and even swamps. This fish is considered invasive in some parts of the world because it adapts so well that it puts other native species at risk.

The body of a largemouth is characterized by an olive or green color and black blotches that create a stripe across the body under the lateral line. One of the key differences here is that the upper jaw extends out past the eye. On smallies, it is usually right in line with the eye. 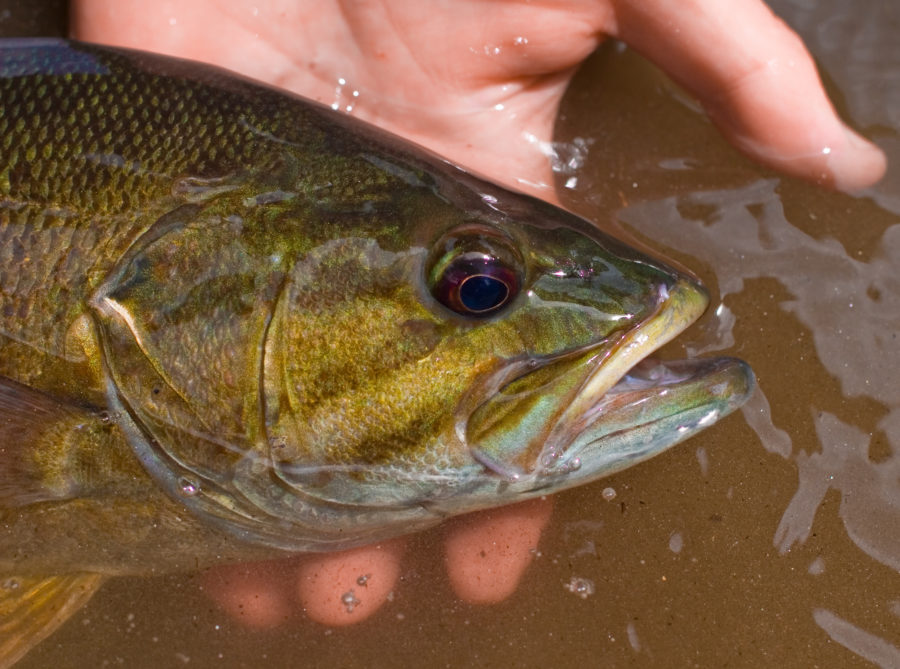 This species is usually smaller than the largemouth, but that does not make Micropterus dolomieu any less desirable as a species to target. These fish are characterized by a brown or golden brown coloration. This has earned them the nicknames “bronzebacks” and “brown bass.” They also often have black blotches, but the difference here is that they are vertical instead of horizontal. As the name implies, their mouth is noticeably smaller in size than the largemouth, but that does not mean they are less aggressive. (More on that later.)

One big difference with this species of fish is that smallies are a lot pickier about habitat. They tend to prefer clear water and rocky bottoms. You are not likely to find them among the lily pads and stagnant waters of a swamp. Smallmouths love rivers and streams. They also tend to do better than largemouths in cooler, open waters like the Great Lakes.

Speaking of the Great Lakes, smallmouth historically had a tight native range that was mostly focused on the Midwest. They have been successful introduced throughout much of North America. However, we have to give a few more points to largies on range simply because smallmouths are not as wide spread. There are large parts of the western and southern United States that have none of these fish at all. That is a shame for anglers who have never gotten the chance to tangle with one.

Smallmouth vs. Largemouth: Difficulty to Catch

Now let us debate some of the factors that may help define exactly which of these fish is America’s favorite. We will start off with ease of catching them. We are leaning towards giving the slight edge to the largemouth here. Of course, largies have something of an unfair advantage in their extended range and the fact that they are not nearly as picky about habitat or food. However, we have found that largemouths just seem to be easier to catch in waters where both are found.

Perhaps this is a testament to a largemouth’s appetite. They are seemingly never full. I remember catching a 5-pounder here in Michigan more than 20 years ago that had a huge crayfish claw sticking out the back of its throat. The thing had just fed, but was such a glutton that she could not resist hitting my spinnerbait.

It is not that smallmouth are not aggressive about feeding, but they do seem to be slightly less hesitant to strike than their largemouth cousins. It often feels like smallmouth are smarter than largemouths. I have discovered smallies tend to spook easier too. I love to sight fish. It is one of my favorite ways to pursue bass. However, you rarely hear about people sight fishing smallies. Not that it does not happen, but it seems largemouths are more susceptible to it.

In my experience, smallmouth bass seem to be a little bit pickier about color patterns and lure sizes too. While this makes them more rewarding to catch in my eyes, it can also lead to frustration as you try to figure out the pattern. 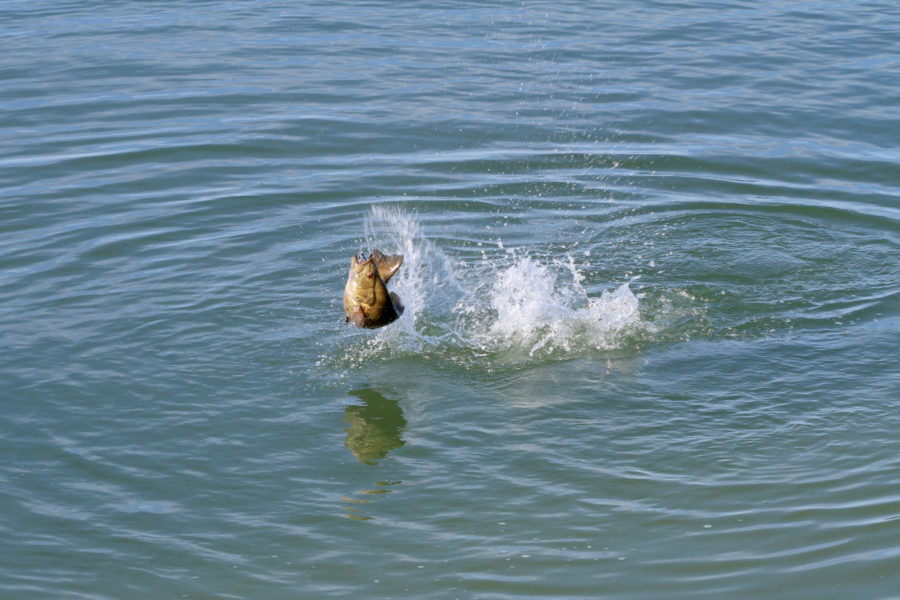 The whole reason bass fishing took off is because these fish are excellent fighters. Both species are apt to spectacular leaps, head shakes and runs. Who among us has not experienced the pain and frustration of hooking into a giant bass only to have it throw the hook the first time it surfaces? The fight from a bass is like a drug. It is highly addictive. Once you have experienced one leap from a big bass, you want to see and feel it again and again.

When it comes to the debate over which fish fights the hardest, I think most anglers will agree with me when I say the smallmouth. Pound for pound, this is a fish that just never seem to give up. By contrast, I have caught big largemouths that have seemingly relented the second they realize they are hooked. This is not always the case, but it does happen.

That never seems to happen with smallies. Just when you think you have them in the boat, they’ll make two or three more hard-charging runs as they try to avoid the net or your hand. They remind me of northern pike in that way. Even the tiniest smallmouths always seem to feel bigger than they really are. We are not sure what gives the smallmouth their spunk, but we love it. It is what keeps us targeting this species over and over again.

The daughter was a large excitement when she looked it. She tell me about it every day! Maybe she want to catch a big bass of world record class…

This is not even a contest. When it comes to which one grows the biggest, the largemouth wins hands down just by nature’s design. However, we want to give it more of a quantifier than that, so let us look at the odds of a record catch. Both the largemouth and smallmouth bass all-tackle world records have stood for a ridiculously long time. However, odds are in the favor of the largemouth for that record to be broken any day now.

George Perry originally set the world record of 22 pounds, 4 ounces for a largemouth back in 1922 and he was tied in 2009 by Manabu Kurita with a giant bass of the same weight caught in Japan. Unofficially, a 25-pound, 1-ounce largemouth was caught out of Dixon Lake in California by Mac Weakley in 2006. Unfortunately, he foul-hooked the bass and Weakley ultimately decided not to pursue the record due to the IGFA’s rules. He did this even when they offered him a reprieve because the foul hooking was not intentional.

So, there is precedent for the world record being beatable, but we cannot say the same for the smallmouth bass record. David Hayes caught the 11-pound, 15-ounce smallmouth world record from Dale hollow Lake in Tennessee all the way back in 1955. At this point, the Hayes record may be unbeatable. Because this bass was nothing less than a total genetic freak of nature. The evidence is in the records. The next largest smallmouth ever caught was a 10-pound, 8-ouncer, which also came from Dale Hollow. Other than that, fisherman have struggled just to crack the magical 10-pound mark for a smallmouth in the decades since Hayes’ catch. With most fishing records, people at least catch fish that are bordering on the record, but no one has even come remotely close to sniffing an 11-pound smallmouth since 1955!

The Hayes fish was not just the fish of a lifetime, it may have been the fish of a thousand lifetimes. We simply cannot see this record falling anytime soon. Therefore, we give the edge in size fully to largemouths because at least there is precedence for the chance to break that record. 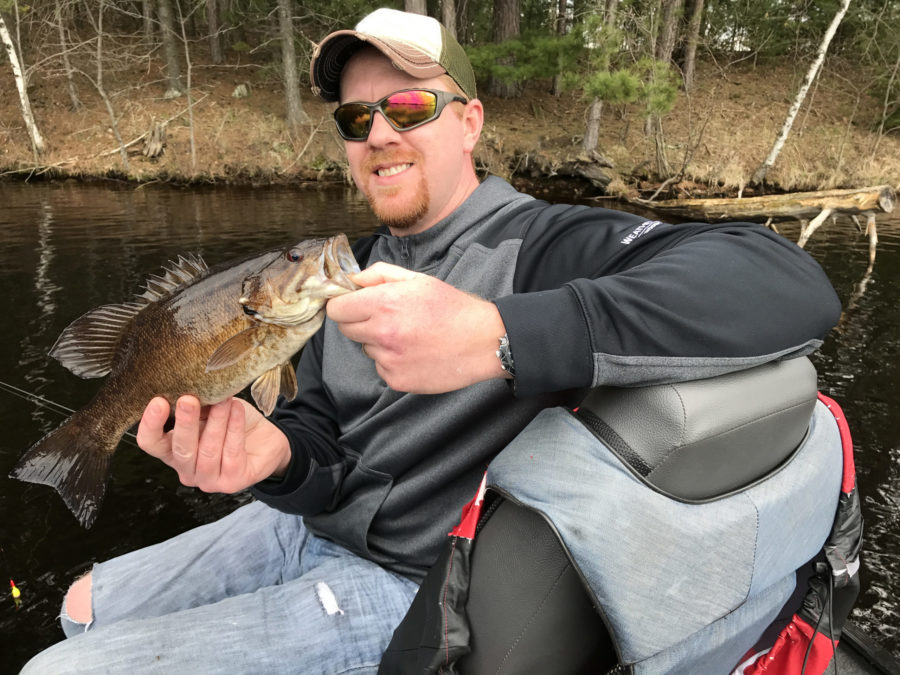 We know that beauty is subjective, but in our humble opinion, the smallmouth beats out the largemouth in the looks category. Both are beautiful fish, but there is just something that seems more appealing about the brown/bronze and vertical blotches of a smallmouths. We also really like those dark phases of smallmouth that appear almost entirely brown or black in coloration. Combine that with this animal’s often red eye and it just makes the smallmouth’s appearance stand out in a crowd.

The smallmouth also has a much more streamlined and athletic profile than the largemouth. I have seen some stunted largemouths in the past that appear almost comical due to how large their heads are as compared to the rest of their bodies. Maybe that is why smallies are better fighters, physically they are just aerodynamically shaped better to battle. That is just a guess, we are not scientists, but we will stand by our stance that the smallmouth is the nicer looking of these two species. We will also give a slight edge to the smallie for usually living in more scenic locations like fast-flowing rivers and streams as opposed to the swamps and backwaters largemouths love. One of our editors, David Schlake, insists that smallmouths taste better. The rest of us on staff here do not eat bass, so we will take his “Smallmouth is good! Largemouth is nasty!” at his word.

Who wins in largemouth vs smallmouth?

Honestly, this is a close race and one that would probably require analysis of a photo finish. It is hard to say exactly how many anglers target each species here in North America year after year. However, both species regularly play a vital part in pro bass fishing tours like Bassmaster, FLW and more. These are unquestionably the two top bass species in the world.

In the end, we give a VERY slight edge to the largemouth for America’s favorite. It wins out mostly because they are more abundant, have a wider range and grow to larger sizes than their smallmouth cousins. For you smallmouth enthusiasts we want to stress that the margin between these two species is razor-thin. If smallies had a greater distribution, we think they would seriously be the running for America’s favorite.

Either way, these two species have earned their place in the hearts of anglers world wide and we cannot wait until our next fishing trip to catch some more!