The Hartmann mountain zebra is plentiful in Namibia and parts of South Africa, and is a challenging game animal with excellent meat.

The first Hartmann mountain zebra I ever saw stood alone on a rocky ridge leading up into the heights of Central Namibia’s Erongo Mountains. I can still see the dry wind whipping its mane, and in my mind’s it’s a stallion, defying us before turning to join his hidden herd. But maybe it was a lone mare–with a quick glimpse at a couple hundred yards, it’s hard to be certain!

That was forty years ago and it didn’t matter; a mountain zebra wasn’t a goal the first time I hunted Namibia and wasn’t in the budget anyway. I had taken plains zebras elsewhere, and a zebra is a zebra, right? That’s a typical assessment for folks hunting Namibia for the first time, especially if they’ve previously hunted in other African countries. Although normal and understandable, I think it’s a huge mistake to write off Hartmann mountain zebra as “just another zebra.”

The Hartmann’s zebra is larger, with a distinctive striping pattern that, to me, is more beautiful than the plains or “common” zebra. Facial stripes are usually brown, darkening with maturity, but body stripes are stark black and white, without the gray “shadow stripes” of Burchell’s zebra, southernmost race of plains zebras. Older individuals, especially males, tend to have a pronounced dewlap, and all mountain zebras have a distinctive and attractive triangular pattern of stripes above the tail called the “Christmas tree.” 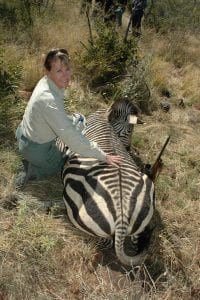 The triangular “Christmas tree” rump marking is distinctive of the mountain zebra. This big stallion was taken in the Erongo Mountains in central Namibia.

The two mountain zebras (Hartmann and the smaller Cape mountain zebra) are a separate species (Equus zebra) from the several races of plains zebra (E. quagga). In Southern Africa game ranching has moved animals around for decades, so the mountain and Burchell zebras frequently bump together. One could theorize that this also happened naturally, with Burchell zebras in the valleys and mountain zebras up in the rocks. The two are not known to interbreed.

Just a couple weeks ago I was in Kaokoland in northwest Namibia, big, rugged country. It was ideal mountain zebra habitat, and they were plentiful. We were headed back to camp after a morning hunt, still hoping for a zebra for leopard bait, when we spotted a small group resting in shade along a rocky canyon. Outfitter Jamy Traut took Dan Baker on a quick uphill stalk. A few minutes later we saw the zebras as they spooked over a ridge. The hunters soon came back shaking their heads. They were Burchell zebras, not usually present in the area, and not on quota.

All zebras are beautiful and wary and difficult to stalk, with keen senses. I think the mountain zebra’s black-and-white skin is more attractive than the Burchell zebra with its prominent shadow stripes. However, farther north there are other races of common zebra with stark black-and-white striping that are equally gorgeous.

What sets the mountain zebra apart is the fact that it really does prefer mountains, and offers an entirely different hunt. Sure, you may find plains zebras quite far up in hills and you can catch mountain zebras crossing valleys. In their native habitat of tall, rocky ridges the mountain zebra offers a genuine mountain hunt, a matter of diligent glassing and careful stalking—and, often, a lot of hard work! 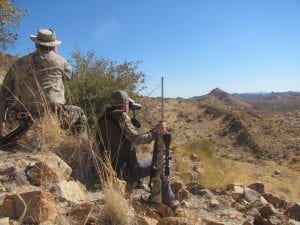 Glassing for mountain zebras in typical habitat in Namibia. In natural habitat like this Hartmann zebra offers a true mountain hunt, a wonderful experience.

The second time I hunted in Namibia I remembered that lone zebra I’d seen, and I put a mountain zebra at the top of my wish list. In those days Namibia’s safari and game ranching industries were in their infancy and all species were less plentiful and more localized than today. Mountain zebras were scarce and pretty much restricted to high, remote areas. Getting one was a tough and difficult hunt that I have never forgotten. Today mountain zebras are plentiful and have expanded (both naturally and through introduction) across most of Namibia, except that from Etosha and on northward and eastward, the plains zebra dominates.

It doesn’t matter if you’ve hunted elsewhere and already have a zebra rug. The mountain zebra is different enough, and offers a different enough experience, that I strongly recommend hunting one when you’re in their domain—especially if it’s native habitat. The spine of the Erongo range is still superb mountain zebra country, but there are other great places. A few years ago, Donna and I hunted southwest of Windhoek, where the high escarpment drops into the Namib Desert, creating a moonscape of boulder-strewn ridges and deep canyons. Mountain zebras were plentiful, great country for glassing and stalking. Just now we found much the same conditions in Kaokoland. Excepting big herds of springboks in the valleys (and excepting that out-of-place herd of Burchell’s zebras), mountain zebras were the most plentiful large animal. Hunting them offered a great experience but, in the midst of what might be a hundred-year drought in Namibia how they manage to thrive is a mystery. In one area we knew of nosurface water nearby. Dan Baker shot a huge stallion, the largest-bodied zebra I’ve ever seen. Its stomach was full of water, so obviously the animals knew the area better than we did! 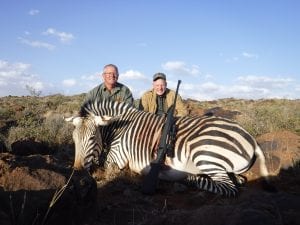 The original range of Hartmann zebra in South Africa isn’t precisely known, nor, after the excesses of the pioneering era and the ravages of the Boer War and its long aftermath, is it known exactly where Hartmann left off and the Cape mountain zebra picked up, with recent DNA research showing little difference between the two. In the past I’ve considered the Hartmann mountain zebra a Namibia specialty, and thus hunting them in South Africa a bit of a travesty. Well, you don’t know what you don’t know. On the way back from Namibia I spent a few days with outfitter Mike Birch near Kimberley, a part of South Africa I hadn’t seen in decades. The tall, rocky hills were ideal mountain zebra habitat, and I have never seen such a concentration of Hartmann mountain zebra.

The first morning I climbed a tall hill to glass without realizing Hartmann’s zebra were present. I quickly picked up a small group on the next ridge, saw the stripes, and realized what I was looking at. There was another group down in the valley and more to the right and left. Without changing location, I lost count at forty.

A couple of days later, after a long and difficult stalk with Mike’s excellent tracker, Albert, I shot one, but it took a step as I fired and I knew the hit was a few inches back. Any wounded zebra is bad news, and this one took us across the valley and up the next ridge. The spoor suggested entry and exit and showed lung blood. I was sure we would find it quickly and we did, precisely on the top of the next mountain! We called for help, rolled the zebra into a tarp with handles, and carried it wholea half-mile down through the rocks. The guys suggested that, next time, I should shoot my zebra in the valley, not on the top! My aching back agreed, but one way or another, a zebra is always recovered. The skin is priceless and the meat is quite good. For those who care, mountain zebra flesh is leaner and tastier than plains zebra. We all keep learning, and now I realize it doesn’t much matter whether they’re hunted in Namibia or South Africa. The Hartmann mountain zebra is still my favorite.