On safari with… Ryan Phelan

I was born in Pietermaritzburg in 1980. My parents, Paul and Jan, were living in Lotheni in the Drakensberg at the time, working in conservation for the Natal Parks Board.

Therefore, my home has always been the bush, and for this I am ever grateful. With experiences in game reserves in Northern Zululand where my earliest memories are of going with my dad after young marauding male lions that had broken out, to shooting problem hippo under the full moon as they wallowed in the pans, it is no surprise that my passion and interest is conservation, hunting, guns, shooting and reloading.

My father was managing a 100,000-acre reserve and running the safari operation. I was thus exposed to the safari industry and foreign clientele from the beginning, and actually hunted my first antelope, a blue wildebeest, thanks to the kindness of a client hunting with my dad at the time. After being home schooled ‘til the age of nine because of being so isolated, I then attended boarding school in Kimberley and Bloemfontein. I spent every second of every holiday in the safari camp just lapping up the dos and don’ts and essentials of safari life. Some core values I was grounded with were respect for the animal being hunted, and to maintain one’s ethics and morals at all times. And all I wanted to do was become a professional hunter after reading all the books of the early hunters. 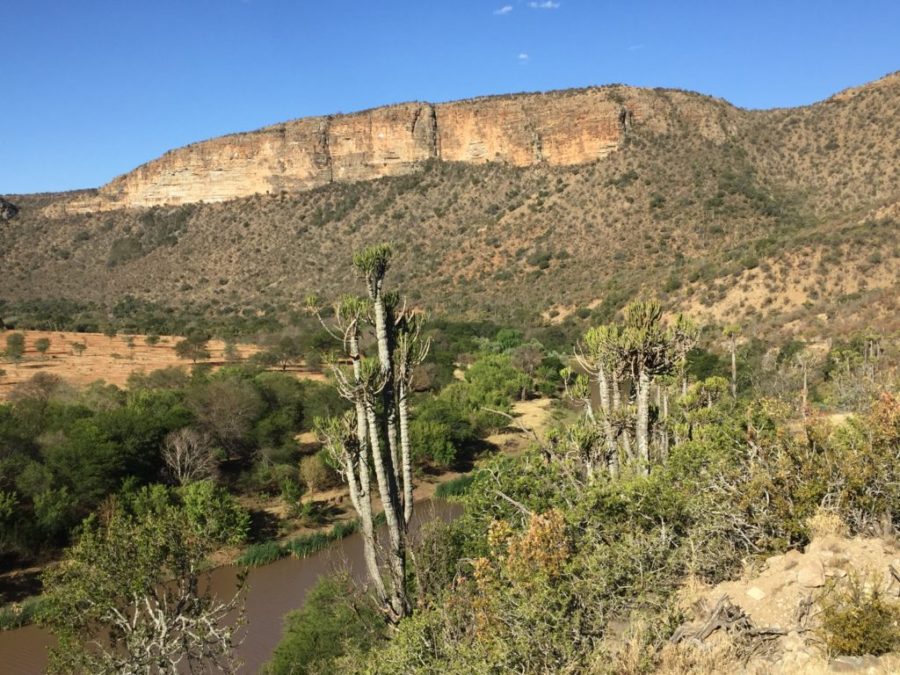 Thankfully, my father pushed me to complete a degree first. I completed my professional hunters course with Johan Calitz in 1997, then attended Stellenbosch University where I completed a Bachelor of Science in Animal Physiology, Zoology and Nature Conservation. During every holiday in the hunting season I was off to do apprentice work, gaining dangerous-game experience with the likes of Johan Calitz in Botswana under Terry Palmer, Roy Vincent in Zimbabwe, and Carl Stormanns and Paul Phelan in South Africa. To these people I give thanks for their invaluable lessons.

Degree complete and unrestricted license obtained, I began to freelance for a few outfitters in South Africa until being offered a job to run and develop a private area in the Tuli Block in Botswana, where once again I acquired valuable experience.

This was where, at the age of 23, I learnt a lesson in shot placement on an elephant.

It was a young problem bull that was constantly breaking solar panels and installations, so after getting permission to remove it, armed with a 9.3×62 with a scope and no backup, I headed off to find this bull. After glassing for him from the top of the rocky outcrops I started my stalk. I remembered the voices of all my mentors: “When you think you’re close enough, get closer,” so I did. He knew something was up, but not what. I eventually closed the gap to about 18 meters. Now that is close with a 4 x scope! I clearly remember Carl Stormanns instructing me to, “aim at the top of the back of the zygomatic arch,” which I thought I did, and squeezed. Well, the little Mauser was reloaded hastily as the elephant did a 180 degree turn, and it received another 286gr Barnes solid where I thought the brain was. It spun round once more, whereupon the third round found the mark, and as the rear legs collapsed, the fourth was fired through the back of the skull as it jerked up.

I was humbled and in awe, but lesson learnt: If you miss the brain, miss just under as I did – you are already disrupting the blood supply to it, thus causing a bit of confusion and buying some time.

Hunting has allowed me to meet the most amazing people and travel to incredible places. I have hunted in Botswana, South Africa, Zimbabwe, Mozambique, Austria, Germany, Russia, America, Canada, England and Scotland.

I now live in the beautiful Eastern Cape of South Africa and we have our own reserve, Turnstream Reserve, which is the base camp for Hotfire Safaris. We are a small, highly personalised exclusive operation focused on creating an experience of hunting how hunting should be – on foot, glassing, climbing hills and valleys looking for that old elusive bull of a lifetime. We take into consideration every fact and facet of the client and his abilities, and endeavour to make his hunt successful and memorable. 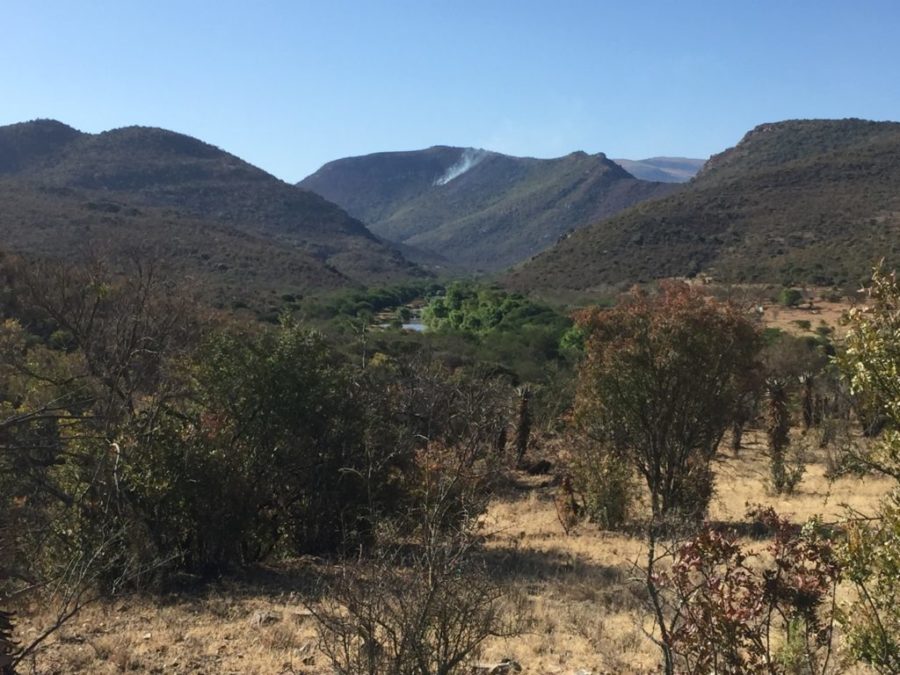 We also have maintained the traditional tented safari camp, as this was what brought hunting to Africa years ago and was the African Dream – not a palace in the bush as clients can get this back home. (But we do have comforts such as electric blankets and heaters, etc.)

Each animal has its own uniqueness, tricks and elusiveness, and as such, all are great fun to outwit, but personally I love hunting buffalo. Getting right in close in the thick brush when your temples are throbbing and adrenalin coursing through your veins – nothing beats that for me.

Over the years I have taken some incredible trophy animals with clients, but to me a trophy animal is not how big, etc., it’s the animal that was right to be taken at that time and the experience that led up to it that made it for the client. I am a firm believer in quality photography after the shot, as that is all one has ‘til you get the trophies back. These are the memories. 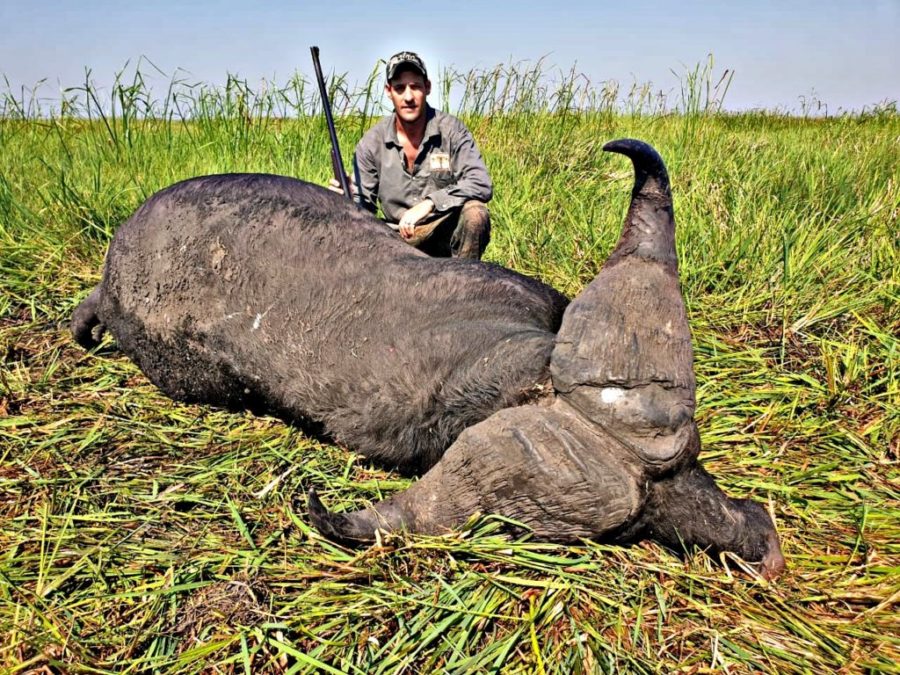 If hunting dangerous game, use a minimum (or bigger) of .375 with 300gr premium bullet like the Swift A-Frame. That said, rather shoot a.375 well, than flinch with a .460 Weatherby.

Some advice to a client coming to Africa: Wear good, comfortable rubber-soled boots not fancy things with air in the soles as they are just so noisy. Secondly, practice at home off shooting sticks out to 250 meters. Practice, practice, so it’s muscle memory when you get here, and that trophy of a lifetime becomes a reality and not a lamented story. 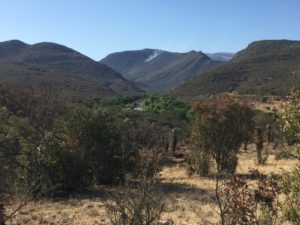 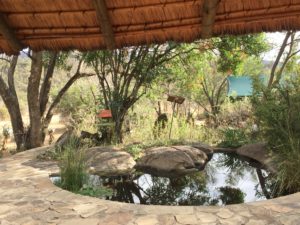 A short story to end off…

On one occasion, a friend of mine had a concession in Zimbabwe in one of the CAMPFIRE areas where he was notified by the villagers that there was a bull that was raiding their mielie (corn) land every night. He did not have the rifles to do the job and asked if I was interested to help. What a question! A quick visit to the SAPS, and with temporary export permits in hand, off we went. 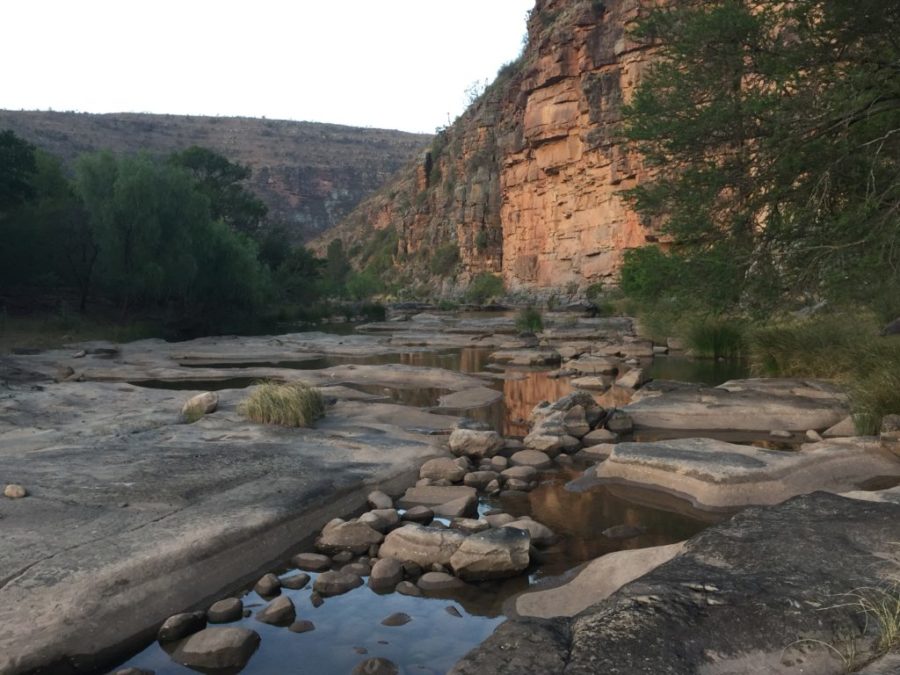 We arrived mid-afternoon at the camp and after a quick meal and a lengthy chat with the trackers and some villagers, we headed out to the mielie fields that were being destroyed. My friend had my .458 Win Mag and I had my trusty 9.3×62 loaded up with 286gr Barnes TSX. We parked the Land Rover some distance away and walked quietly towards the lands.

Upon scouting around we found buffalo tracks coming in from the thick thorn scrub on the southern side. The wind was blowing from the southeast so we positioned ourselves with a view of that area on some high ground to the northwest of the land and waited. We waited till dark, but nothing arrived.

Disappointed, we headed back to camp to settle the dust in our throats and hatch a new plan.

We decided to be back at the land at daybreak to see if the offending buffalo was still there.

As soon as we were just able to see, we were back on the edge of the land listening for any sounds of buffalo in the mielies. We sat watching the edge of the field, and after an hour or so decided that we had either missed him or he had not come.

We scouted around again, and lo and behold there were fresh tracks, in and out, from the previous night.

This called for new tactics. We chatted to our trackers and decided that we would return mid-afternoon and set up on an old giant termite mound in the middle of the mielie field. It had been used by the villagers as a guard to keep baboons away, and had a wooden structure to sit under.

That afternoon we returned with a 12 volt car battery, a spotlight, and one of the trackers to be the spotlight holder.

We settled ourselves into position for the long wait. Mopane bees nearly drove us away, but our will to outwit this old buffalo was too great. The sun set as it does only in Africa, a giant burning ball of crimson red, thus adding to the emotion of the hunt. We had a plan. If the buffalo came into the land, the tracker would turn on the light on my command and we would fire on the count of three. Now we waited, the fading light playing tricks with our eyes, every new shadow and dark shape looking just like a buffalo.

It was about 19h15 and the moon was just casting a glow across the lands and surrounding bush when I heard a light crack of a branch. I looked in the direction with my binoculars and saw a big buffalo heading our way into the mielies. I whispered to my colleague and the tracker what I had seen and to be prepared. As the buffalo entered the land we could see its outline against the yellow mielie stalks. When it got about 65 meters out in front of us we raised our rifles in unison as if on command and, as instructed, the tracker turned on the spotlight. The buffalo bull froze in mid-stride and swung his head in our direction.

On three – Boom! Boom! The two rifles blasted almost simultaneously, both striking the mark in the chest. The bull spun round and took off in the direction of the thorn scrub. I managed to put two more rounds into it before it reached the long grass on the edge of the land. It entered thisgrass, stopped, raised its head and looked back, now at about 175 meters. I could just see the outline of a head and glow of one eye. I took aim where I thought the brain was and squeezed off my last round. The glow disappeared. We sat down excitedly whispering to one another about what had just happened and what we should do. We could not walk into 4-foot-high grass at night with a possibly wounded buffalo, so we decided to go and get the Land Rover and drive slowly into where we had last seen it.

We edged the vehicle slowly through the long grass, and about 35 meters in we found the bull stone dead. I found that my last round went through the side of the boss and into the brain, ending it. My other three, and the .458 rounds were all in the chest and would have definitely done the job, but one can never be sure with buffalo.

We then discovered that this bull had a snare around it back hoof which was rotten and must have caused severe discomfort, hence the reason for him living right close to the mielie land and feeding there every night.

We had done the villagers a favour, and had ended the pain of this beautiful old bull.

What a spectacular time and, once again, another notch in the belt of the old trusty 9.3×62.