As long as you can keep your shots inside a paper plate, you’ll likely hit the vital zone.

With big-game animals it is always essential to hit a vital zone. Misses don’t count and near-misses are far worse than clean misses. For most of us the “vital zone” means center-chest, the heart and/or lung area. We can debate which is better, but a projectile through the heart or great vessels on top of the heart—or perforation of both lungs—is a hit that will very quickly be fatal. On larger, tougher animals one lung may not be enough, but, considering quadruped anatomy, a shot that catches just one lung wasn’t taken at a very good angle, and perhaps shouldn’t have been fired. 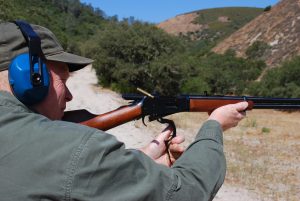 Paper plates are excellent for practicing shooting standing unsupported…something we should all do regularly. This is a Mossberg M64 .30-30 with factory iron sights.

Over the years I’ve talked to and gotten mail from a few hunters who maintain they “only” take brain/neck/spine shots. Such genuine specialists probably exist, but to my thinking a steady diet of head and neck shots would be practical and sustainable only under fairly controlled conditions that kept ranges fairly short. Or maybe these folks just shoot a lot better than I do! Seriously, stand hunters who do most of their hunting from the same stands season after season (especially over feeders or bait piles) have fairly controlled conditions. I’ve heard the same from hunters who hunt hogs with hounds. When a hog is at bay they’re able to get in very close. Some use handguns and a few, where legal, use knives and spears.

I hunt my Kansas whitetails from a daily choice of a couple dozen stands. None require long shots, but quite a few are in thick woods. I wouldn’t want to be held to the precise head or neck shot there, nor, honestly, anyplace else. My North American experience is mostly as a Western hunter, spot-and-stalk hunting that might yield almost any imaginable shot. Mountain hunting is the same the world over, and although long shots are unusual in Africa, you really don’t know what kind of a shot you might get. There are times and places where brain shots and neck shots are appropriate but for most situations I want the largest target possible—and that’s usually what I aim at.

The chest area of even smallish deer and pronghorns is actually a fairly large target. Worldwide there are a number of smaller “big-game” animals: Africa’s pygmy antelopes, the gazelles, European roebuck, muntjac, even our brocket deer and peccaries. However, across the board, the chest area offers the largest target, and as animals increase in size the target area just gets bigger.

An old adage is that “pie plate accuracy” is good enough. I wrote this not too long ago and a particularly precise reader took me to task, asking the exact size of the pie plate I’m talking about. I guess that’s actually a pretty good question because I don’t have a clue! I skipped home economics class and I’ve never baked a pie. I’ve also never shot at a pie plate and I don’t think Donna would be pleased if I did.

So, instead, and much less destructive, let’s talk about “paper plate accuracy” instead.  Turns out that’s not terribly precise, either. I got a tape measure and discovered that, right there in the kitchen cabinet, we have three different sizes of “big” paper plates: Nine, ten, and ten-and-a-half inches in diameter. So, when I say “paper plate accuracy” which size am I talking about?

It doesn’t matter! A nine-inch circle is plenty big enough, and another inch or so doesn’t matter. If you can keep your shots on the plate you should be able to keep them on your animal. You can, of course, draw a circle in the middle for a more precise aiming point. However, game animals don’t have bullseyes painted on their hides, so there’s training value in just shooting at the plate and trying to center it. Another old adage to “aim small, miss small” applies perfectly. All hits count, but central hits build confidence. At any distance your hits start wander off the plate, well, that distance should be your limit for shooting at game.

So, do my paper plates take the place of printed targets with precise aiming points? Heavens no! Paper plates are ridiculously cheap and printed targets are expensive—but I keep both on the range. I generally use the plates for short-range platforms: Iron sights, red dots, big bores that are unlikely to be used past a hundred yards. For precise zeroing and shooting the best groups possible there’s no substitute for real targets. Being lazy, I like the multi-color “splatter” targets that easily show bullet holes, and I also like a printed grid so that I can look through the spotting scope and count the inches I need to move the strike. 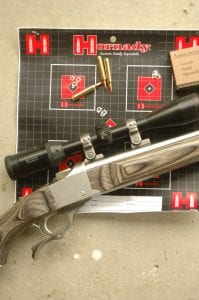 Hornady’s Birchwood targets are a favorite for zeroing and shooting tight groups, especially with high-magnification scopes. Squares and diamonds offer very precise aiming points, and the half-inch grid makes adjustments easy. This a Ruger No. One in .204 Ruger.

Exactly what kind of aiming point works best depends somewhat on reticle and magnification. For fine cross hairs, I prefer squares or diamonds. If you’re having trouble centering the square you can align your crosshairs on one of the corners.For coarser or illuminated reticles and red dots round aiming points are better for my eyes. I keep a stack of Birchwood Casey’s Dirty Bird splattering targets with a one-inch grid and five bullseyes (center and four quadrants), ideal for scoped rifles with modest magnification. For the most precise work I like Hornady’s Birchwood targets with small center diamond, four squares, and a half-inch grid.

Then there are paper plates. We also have plain old bull’s-eye targets in the range locker. However, during the last couple of years my near vision has slipped, causing increasing difficulty resolving iron sights. I have a hard time picking out a front sight against a black bull’s-eye—even when it’s a bold white or gold bead. For me, plain old white paper plates are easier and more visible for a consistent sight picture. The plates are round, as are most front sights. It is thus sort of an optical thing, at least two superimposed circles—and three with the open circle of an aperture sight. So, I’m doing most of my practice with open sights and apertures on paper plates—and I use them with red dots as well, from big-bore lever actions to double rifles.

I have to accept that my effective range with iron sights is greatly reduced from what it once was but, combining paper plates with a new eyeglass prescription, I’m seeing improvement I wasn’t sure I’d see again. And the rules for “paper plate accuracy” haven’t changed: Whether for sighting equipment, visual acuity, unsteadiness, or the inaccuracy of the firearm, at whatever distance shots start to wander off the plate, I’m done. 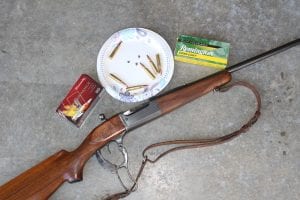 Paper plate groups with this Savage 99 in .300 Savage weren’t impressive but, honestly, that’s about as well as I could see the sights. I was able to keep shots reasonably in the center of the plate…and that’s plenty good enough for close-range hunting.

In the field it’s just like combat: The best plans go awry when the first shot is fired. I missed an easy shot at 60 yards, dark animal in dark shadow, probably shot over. So much for all my paper plate drills, not impressive. Figured it was just me, and I figured right. Just at sunset I rolled a hog, quartering away at 125 yards. Another evening I shot another pig at about 100 yards. Still minute of pig.

Back when I could reallysee iron sights the Winchester Model 71 in .348 was a favorite. I haven’t had one for a while, but I just picked up a 1937 M71 with factory aperture on the bolt. With Hornady’s new LeveRevolution .348 load it passed the paper plate drill just fine. I think I’ll take it black bear hunting in a couple of weeks. 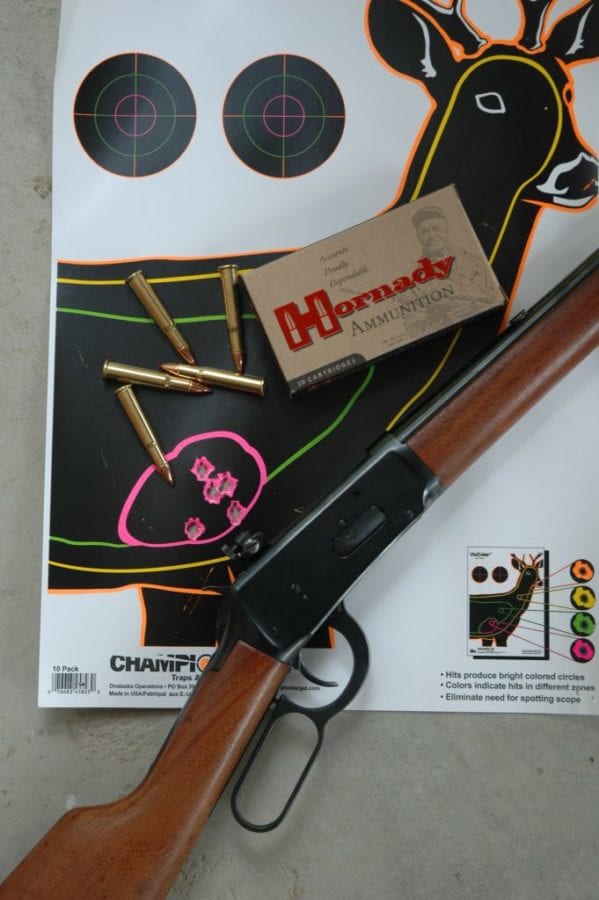 Animal silhouette targets are excellent, especially for inexperienced hunters because animals don’t have aiming points. This is a 100-yard group with my .30-30 Trapper with aperture sights…shot when I could see iron sights much better. A group like this is no longer possible with irons!