A new world-record tiny antelope and an unusual hyena were recently accepted into the Rowland Ward record book.

Interesting record book entries come in large, small, and unusual packages. In August 2018, Rowland Ward received a Top 10 entry for a large brown hyena submitted by Neville Boardman Jr., who shot the animal near Cumberland, South Africa, this past year. 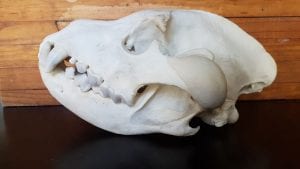 Years ago, hyenas were thought of as vermin and often shot on sight because they were considered cattle killers and hard on game in general.  Attitudes have changed, and now they are carefully managed in all countries with hunting programs and are on license almost everywhere. The most common variety is the spotted hyena, which makes hideous laughlike noises that remind some of a person gone insane.  They are the hyenas most often seen in African nature movies as they are active animals and not particularly shy. Unless hunted hard, they can often be seen during the day.

Two other varieties of hyenas are found in Africa: the brown and the striped. Both are much more reclusive, and permits for these varieties are not often available.  While the brown hyena is shy and not often seen, it can be a real nuisance around safari camps, coming in at night, breaking open supplies, and causing mayhem. It is thought that the jaws of a hyena are capable of exerting greater pressure per square inch than those of any other predator on Earth. Mr. Boardman’s brown hyena was an impressive specimen: The skull of this animal measures 17 14/16 inches and is potentially the new No. 2 record book entry. 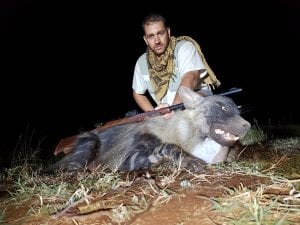 Neville Boardman Jr. with his potential No. 2 brown hyena.

Recently Rowland Ward also received an entry for a new potential No. 1 dik-dik from Namibia.  Dik-diks are among the smallest of African horned game and belong to a class called the dwarf antelopes, which includes grysboks, klipspringers, oribis, royal antelope, and sunis, among others.  A general rule in Africa is: “The smaller it is, the quicker it runs and the more it hides,” and dik-diks are no exception.

Only one variety of dik-dik occupies the west side of Africa, the Damara dik-dik of Angola and Namibia.  The rest of the clan is found in East Africa, with a lot of them in the Horn of Africa. There are four species and some twenty subspecies, and nobody has ever shot them all, which tells you they don’t just stand around.  The name dik-dik is thought to have come from the sound they make (zhik-zhik)as they flee from predators. 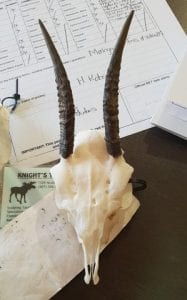 The horn measurements of Potts’s dik-dik shattered the old world record by 1/8 inch.

A whopper of a male of any of the varieties of dik-dik might boast 3 inches of horn.  In fact, of all dik-diks ever recorded, only a handful are close to 4 inches. This potential new world record sports horns measuring 4 4/16 and 4 3/16 inches respectively, clearing the previous world record by 1/8 of an inch!  The hunter was Mr. Chrys Potts, and he was guided by Hugo Kotze from Namibia. The main target of the hunt was actually a leopard, but as the hunters were checking baits each day they saw numerous dik-diks about.  As so often happens in hunting, one day they chanced upon this outsize monster and shot it with a .22 Long Rifle.