Rhino horn trade continues at an alarming rate in SA, despite COVID-19 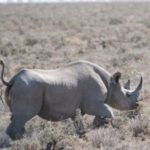 South Africa’s Minister for Environment, Forestry and Fisheries, Barbara Creecy, announced at the beginning of February 2021 that rhino poaching during 2020 had declined by 33% compared to the year before. A total of 394 rhino were poached in 2020 compared to 594 killed in 2019. She also said this marked the sixth year that rhino poaching has continued to decrease in SA, and praised the rangers and security staff that had contributed to this decline. The Kruger National Park (KNP) experienced 1,573 ‘poacher activities’ in 2020, a decrease of 21.9% in comparison to the 2,014 activities in 2019. Of course, much of the decline in poaching in South Africa was probably the result of the COVID-19 pandemic in 2020, with its attendant lock-downs and curfews, which restricted the movement of would-be poachers.

In truth, the number of 394 poached rhinos is really nothing to boast about, and the fact that four consignments of rhino horn valued at over R234 million were intercepted at the OR Tambo International Airport between July 2020 and February 2021 is an indictment that the Minister and her Department should actually be rather ashamed about. Moreover, two recent reports about incidents in protected areas in South Africa are cause for concern about the ability of government bodies at provincial level to adequately protect the biodiversity that is under their custodianship

Also reported in February 2021 was news that the South African Revenue Service (SARS) customs unit at OR Tambo International Airport, Johannesburg, discovered a large shipment of rhino horn worth R53 million and destined for Malaysia. In a statement SARS said its customs detector dog unit identified a suspicious shipment declared as ‘HP Cartridge Developers’ while checking cargo manifests at the airport’s courier facility.

Customs officials contacted the Directorate of Priority Crimes Investigation (aka The Hawks), and their officers confiscated the shipment for further investigation. This was the fourth rhino horn bust by SARS Customs between July 2020 and February 2021at the same airport. It was reported that the overall weight of the rhino horn seized in these four cases was 277kg with an “estimated value of R234,114, 206”.

In January The Hawks arrested a suspected rhino horn dealer in Benoni, a town not far from the Johannesburg international airport. They said that Kelvin Chigwede (36) was found in possession of R500,000, suspected to be the proceeds of illegal rhino horn dealings.

In December 2020 The Hawks organised crime unit in Germiston, Benoni police and SA National Parks (SANParks) followed up on intelligence regarding a consignment declared as ‘chicken food mixture’ at a warehouse in Kempton Park and containing rhino horns weighing about 72kg. The Hawks said the consignment was intercepted by authorities after being dropped off at the warehouse on the same day. It appears that these horns were also destined for Malaysia.

In a very concerning incident that also took place at the start of February, the luxury Bongani Mountain Lodge in the Mthethomusha Game Reserve was burned to the ground – the financial loss is estimated to be around R9 million. This very attractive reserve of 8,000 hectares is located on the south-western border of the Kruger National Park, and has been restocked with a wide variety of animals, including rhinos. The lodge had employed a staff of around 80 people from the local community.

Press reports indicate that a gunfight broke out between alleged poachers and the reserve’s game rangers. Following this, a group from a local village destroyed a section of game fence and attacked the lodge, gutting it completely and looting the contents. The press also reported on the apparent lack of reaction to urgent requests for assistance made to the police and the provincial nature conservation authority, the Mpumalanga Tourism and Parks Agency (MTPA). Lawless activities such as this on the very border of the Kruger National Park are cause for great concern.

In another wildlife drama at the end of January, five elephants broke out from the western boundary fence of the Hluhluwe-iMfolozi Park (HIP) in the province of KwaZulu Natal (KZN). Staff managed to get two back into the park using a helicopter, but the other three walked about 7km from the boundary and were later shot dead by Ezemvelo KZN Wildlife officials. According to the wildlife agency, there were concerns that the elephants were a threat to local people in a nearby village.

This incident re-ignited a controversy about the maintenance of the game fence that keeps the animals inside the HIP. For several years, conservation staff have been warning about the risks of breakouts by lions, elephants and other dangerous animals after a series of controversies and legal disputes over the repair or refurbishment of boundary fences securing the 96,000 hectare reserve.

The provincial wildlife authority, Ezemvelo, has suffered from a series of management and financial crises for a number of years and is currently under administration, with an acting chief executive. Its management board was suspended last year.

For my part, I think Minister Creecy’s optimism around a ‘reduction’ in rhino poaching is badly misplaced, and she and her national department should be very concerned about the state of biodiversity protection being seriously compromised by incompetence and mismanagement on the part of the provincial conservation authorities.