A camp in Texas is helping women learn the skills they need to become successful hunters.

Yes, she hunts! Although hunting remains a male-dominated activity, women are the fastest-growing segment of the hunting community, and they are a much larger minority than when my generation grew up. In a time when declining numbers are the greatest threat to hunting, this is extremely important. We spend much time pontificating—and wringing our hands—over the criticality of recruiting young hunters. This has always been important, but increasingly so as our hunting demographics age.

As our society becomes ever more urbanized, the recruitment and retention challenges increase because of hunter access and ever-escalating costs. The sad reality is that potential young hunters trapped in cities—even those with innate interest—are difficult to reach. The same problem applies to all ages and sexes, but the women within our own extended circles are joining us in unprecedented numbers. From what I hear, there are still a few Neanderthals among us, but I believe (and certainly hope) most of us male hunters are welcoming.

Unlike previous generations, these days many daughters, sisters, and moms grow up with hunting as a normal thing. But unless you grow up with it, suddenly “going hunting” can be intimidating, and even with the best intentions we mentors of the male hunting majority don’t always do things exactly right. 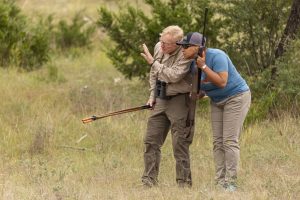 Dani Parris-Exline stalks a “rogue elephant.” We put on a bit of pressure, with the target hidden until the last minute.

Perhaps it was because of my failings that my daughter Brittany established her She Hunts Skills Camps. Britt has been doing this for four years now, hosting groups of up to a dozen—now more than a hundred “graduates”—for busy and intensive, but also fun, four-day sessions. The ladies span all age groups and experience; some are veteran hunters, many new, and some, quite honestly, arrive very undecided about this hunting thing.

The idea is to provide a safe, positive experience, helping women to be safer, more competent, and independenthunters. Recently her camp has been held at Record Buck Ranch near Utopia, Texas, a gorgeous piece of the Hill Country. The food is fantastic, the lodge comfortable and homey, and wildlife on the ranch is amazing, hosting dozens of non-native species, plus white-tailed deer, turkeys, and oceans of wild hogs. Hunting—or “safari style” game viewing drives—are optional early morning and late afternoon activities. Experience has shown that most attendees hunt, even those who initially say they won’t.

Britt obviously can’t do it all by herself. Donna, who has a vested interest in women hunting, usually attends to help out, as does Brittany’s husband, Brad Jannenga. I’ve attended a few, and sponsors, including Krieghoff, Leupold, MGA, and Norma come in to provide expertise for various sessions. In the session just past, in mid-October, shotgunner Kayle Browning interrupted her Olympic training to give the ladies some of the best shotgun instruction I’ve ever seen. Honestly, every time I’ve attended, I’ve learned something. Kayle used some amazingly simple techniques that were absolutely certain to allow new shotgunners to break targets.

So, suppose a lady in your life shows interest in shooting or hunting? How many of us, me included, have taken her to the range, gone through the Ten Commandments of safety, and handed her a firearm ready to shoot? That’s not bad, but it’s not enough. Women are more curious than that, and most want more knowledge, beyond just hitting a target.

Brittany thought this through (without consulting me). Of course, she starts with safety, reinforced throughout, but before shooting they start with functioning and loading, then mounting a scope, then bore-sighting, and then zeroing. It makes me feel pretty stupid because I never taught my girls these things. Those were my chores. Now, there are some great shooting schools out there. She Hunts is not a shooting school, not in four days with all the rest. In military terms it’s a bit more like “familiarization fire,” not in-depth training. But shooting includes off sticks with both .22s and centerfires, shooting off the bench, and at distant targets. Basic archery is included—in this recent session several of the ladies were already bowhunters—as is basic shotgunning with, as I said, exceptional instruction.

Other seminars include conservation and hunting ethics, shot placement on game, stalking, basic gear, survival technique, and firearms maintenance. There’s even a fun thing where, with a “PH,” attendees “stalk” a life-size buffalo or elephant target, and take it on, usually with a double rifle in moderate cartridge.

One of the most confusing things in our male-dominated hunting world is “bullet basics”—cartridges, bullets, how they’re named, how they work, and what various cartridges are for. Many boys grow up reading Guns & Ammo; most girls do not. But, honestly, cartridge nomenclature is so conflicting that even many of my writer colleagues don’t really understand it. Trying to make sense of this arcane and boring stuff was my most daunting task at the last camp. Fortunately, there is no exam, but I found the ladies attentive and interested—and full of very good questions. Knowing song and verse doesn’t matter, but it’s important to know that a .30-06 is larger and more powerful than a 7mm-08 or .270…and why. 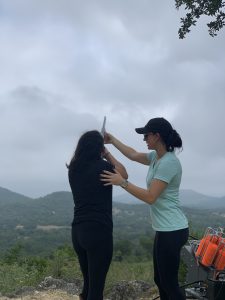 Many attendees have never used a shotgun, but Olympic hopeful Kayle Browning is able to get everyone to break clays in just a few shots.

One of the great advantages to doing something like this on a Texas ranch is the year-round hunting opportunity. Those who wish to hunt can, and plentiful wild hogs (no license required) offer an inexpensive opportunity with success highly likely. So, for the field dressing and butchering seminar, it was no great trick to produce two big wild hogs. Last time Brad and I did this together, starting with the traditional field dressing technique, from the belly. Then we did the “Alaskan” method, peeling down from the backbone, finishing with hung quarters and backstraps and tenderloins ready for the table. Field-dressing is another chore that I used to keep for myself. When Britt was a teenager, to my surprise, she begged me to show her how.

Come to think of it, my dad was a bird hunter, and I’m not sure he ever learned how to field dress a deer—that was my job! Ultimately, I suppose it really doesn’t matter who does it, but after all, it’s an essential skill that every hunter should know. As we got to the second pig, I was impressed with how many of the ladies pulled on rubber gloves and pitched in. Although this would be beyond me, the game care seminar is followed by an expert’s spin on game cooking.

Aside from availability of game, Record Buck’s facilities provide a perfect venue. Lodging for attendees is in the main lodge, with rooms off to the side and upstairs, with dining room and after-hours bar downstairs. Strap-hangers like me and “guest lecturers” are housed separately, so it’s a nice combination of privacy and coziness that brings the group together and creates a lot of camaraderie. Let’s face it, guys: Lady hunters enjoy being with other lady hunters now and then!

As for hunting, Record Buck offers plenty of opportunity, and over the course of a half-dozen early morning or late afternoon outings most hunters will have an opportunity at the game they seek. Several opted for wild hogs, which are truly a plague in this area, certainly the most plentiful and available species. One woman shot a beautiful blackbuck, another a fine axis deer, still another a scimitar-horned oryx. One young lady, Lauren, wanted a zebra! Guide Houston Erskine is a good friend and excellent (and patient) guide. Record Buck has a breeding population of zebra, but as Houston and Lauren set out, he mentioned that, as in so much of Africa, a zebra might be the most difficult animal on the ranch. I think it took four outings and several failed stalks, but Lauren took a beautiful zebra with a perfect shot, and I was delighted to be there to see it.

As usual, most of the attendees chose to hunt, and all who did shot well and effectively, with no drama. In my experience, having “created” several female hunters, this is typical. Women haven’t been subjected to macho posturing most of their lives–they start with few bad habits and are interested in listening, learning, and doing it right. And, with good instruction, they tend to do it right. With every one of Brittany’s camps that I attend, I realize I could have been a much better teacher! Brittany has four sessions scheduled at Record Buck in 2020. For information visit www.shehuntsskillscamp.com.