The Achilles Heel of Conservation

Conservation is a global challenge and battle. Movements against climate change, plastic pollution and deforestation are on the rise. So too are ground-breaking research and futuristic interventions. And yet the natural world is still burning. Nowhere is this more evident than in Africa, and this is why.

I am an aspirant ornithologist and a conservation leader pursing a Master’s degree in Conservation Biology, one of only two Black people in my class at the University of Cape Town. On my first day, while getting a coffee at the kitchenette, a friendly Black South African passed the comment, “So you’re with the rich kids!” after I told her what department I was in.

Unfortunately, this is the prevailing stereotype across Southern Africa. Conservation is a luxury, pursued by the rich and a field for the privileged. There is a huge gap and a disconnect: Black people in Africa have accepted and now believe that the love of nature and wildlife is a “White thing”; and White people believe Black people do not love or know as much as they should about nature and wildlife.

There are a few exceptions and places where this is changing, but this has been the prevailing mindset since colonial times, when national parks were fortresses put up to “protect” nature from the Black communities that had lived in harmony with it for centuries. But this status quo cannot persist because it begs the question: Who are we conserving Africa for, if the majority is not part of or interested in the solution?

Why Africa is failing

Here is another question: Why is conservation action yielding better results in America and Europe than in Africa, where there is far greater opportunity, more protected land and more wildlife, and more funds are poured into projects? Other continents have real conservation wins: Species coming back from the brink of extinction, polluted river systems restored, destructive development projects halted, people’s attitudes changing. These wins are few and far between, but they are wins. Africa, on the other hand, faces more poaching and environmental degradation with every year that passes.

Africa has the youngest and fastest-growing population in the world and what we do today sets the pace and trajectory for our continent’s development. Yet a fundamental problem exists: Conservation in its current form will not be effective in our Africa. Impactful and effective conservation efforts require system-wide thinking and behavioral change. And it takes much more than scientific brilliance to influence behavioral change—it takes passion and dedication and understanding.

For many of us, Africa was never a choice or an option on the map. Africa is not a dream of charismatic wildlife, golden savannahs and swampy jungles with elusive creatures. It is our home, our reality, not a dream we have attained. Africa chose us and it is our only option because going to another continent for a successful scientific career is not something we can aspire to or afford. (Although we can enter the health-care systems of those continents, perhaps as nurses, in order to make good money to send home.) And we need to solve conservation problems here, in Africa, not somewhere else.

But for young people in the West, Africa can be a new chapter in their lives, and it is within reach and affordable. They can pick any country or species in order to “find themselves” or invest their passions. The African job market is ready and willing to assimilate them, instead of building capacity and interest where it is really needed, in-house.

I speak from experience. A summer internship for a British young lady lands her a managerial research position above a local graduate who interned in the same place for a year but has to give tours and host visitors to the facility. And organizations that run volunteer projects to give internationals an eco-tourism experience and university credits are priced too high for local students to participate in. I tried to join such volunteer programs. I finally realized they would not accept me if I did not pay up front in American dollars, never mind the knowledge I had to offer or gain.

The conservation “industry” is not economically accessible to Black people—especially, ironically, in Africa. We know that money should not be the motivator for us to enter this industry, and most people do not go into conservation for the money. This makes it seem that one cannot make a decent living from a career in conservation, but this is not true, as many of the conservation professionals I interact with have a better living standard than most other people I know in Africa.

Money aside, there is a ceiling in conservation, and it is White. The opportunities for Black scientists to grow professionally, at least at the rate of our counterparts, are minimal. We have to work much harder in order to reach any benchmark and qualify for any advancement. Here it is common for graduates to intern for years, earning peanuts. Nor is conservation a cheap field to be in—the appropriate gear and clothing is expensive, and so is being in the right place at the right time. 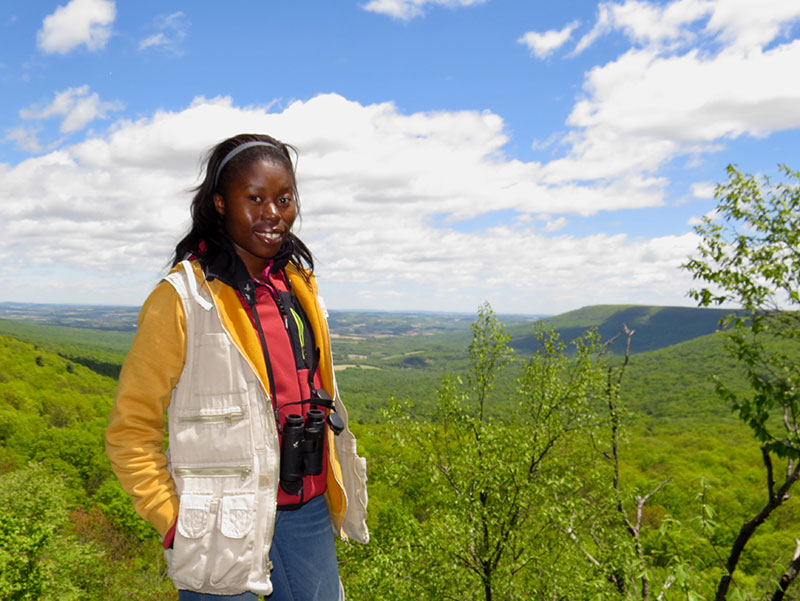 The author in 2017 as a trainee at eastern Pennsylvania’s Hawk Mountain wild bird sanctuary in the US.

I have been to week-long conferences where just the meal tickets cost enough to exclude an entire demographic. Everywhere in the world and especially in Africa, scientific conferences are expensive, exclusive and lacking in non-White representation. This is one more example of how conservation is not yet inclusive or considerate of, and attuned to, the Black African experience—and yet these conferences are meant to be useful to me, as a wildlife scientist, and to Africa.

A recent commentary in the South African Journal of Science titled “Why are Black South African students less likely to consider studying biological sciences?” stirred reactions all over the country. The problem is well-known and fortunately, in our lifetime, spaces are being created for these conversations. Peer-reviewed scientific publications are now also reporting on racial biases. It is important to get our African voices into these conversations. We cannot continue to have Africa’s history told from a non-African worldview, and Africa’s conservation challenges studied only by visitors.

The SAJS article cites a survey that asked Black students about pet ownership and whether they believe that people evolved from apes; that asked members of a Black community with high levels of poverty and homelessness about social inequality versus the environment, and national parks versus land for the poor. Such questions do not relate in any way to the Black African personal experience—but the study used them as evidence of why one would or would not choose a career in conservation. Why not ask how old they were when they first visited a national park?

Even on the most integrated campuses, people do not relate to or understand the Black experience because of superficial interactions that occur every day. Black people keep filling a certain role that makes them belong, and White people continue to believe that their life experiences, such as relationships with pets, are the standard and that everyone relates to the world and makes decisions based on the same worldviews.

A lot needs to be done—ask your Black colleagues how. They know best why biological sciences are least chosen by those like themselves. They know how to make the space more inclusive, because they each have stories and personal experiences. Here is one of mine:

During my internship, I developed an initiative to invite local children to the facility where I worked. My plan was to put together a bird conservation club that would bring different groups of children together. At the last minute, my White boss told me that, for security reasons, she would be the one to invite the children, via email. She was concerned that children would tell their parents about our facility and they would break in and rob us at night. (The property was a fortress—surrounded by an electrified fence with a coded gate and guard dogs.) Such unfounded fear of local Black people by White conservationists is common.

Ask your Black colleagues how to do things better and how to be relevant for the times, because otherwise Black communities are excluded from conservation. Like Professor Drew Lanham, who wrote “Birding while Black,” said in a webinar: “If you do not have time for my issues, I do not have time for yours.” Most conservationists don’t even bother to learn local languages or pronounce things right, and then assume that their surveys of people of a different language and culture are not superficial.

Almost all Black people in conservation identify as science communicators because we have to double up in this role in order to educate our community in ways that we know work. I have mentored, presented, taught and trained countless individuals who never owned and cuddled pets, and I have seen their lives literally changed by one encounter with an animal or one chat about vulture conservation. All this I do without a budget or benefactors, without colorful handouts and pamphlets.

Conservation must decide what is the primary focus: Publications and “discoveries” in Africa? Travelling and working in remote and picturesque places? These must take second place behind solving the problems that will destroy conservation for all future generations. Our historian and poet Pathisa Nyathi once said to an audience at a vulture talk, “Keep frowning on African culture and your birds will be driven extinct by what you call myths and superstitions. Beliefs are as real as their consequences.”

The researcher who fell in love with Africa and her wildness from National Geographic films or at zoos will have a different commitment to our problems than the one who knows the hunger caused by an elephant raid or who herded cattle in a village where lions prowl at night—one who truly knows that your next meal and your life depend on the environment you live in. People do not care how much you know until they know how much you care.

Merlyn Nomusa Nkomo is an ornithologist with an undergraduate degree in Forest Resources and Wildlife Management from Zimbabwe’s National University of Science and Technology. She is currently a volunteer graduate researcher with two grants—one from the African Bird Club for research on the vulnerable southern ground hornbill in the Matobo World Heritage Site, and the other a Hawk Mountain Sanctuary Project SOAR grant for vulture research. She is the youngest member of the BirdLife Zimbabwe committee, Matabeleland branch, where she mentors the BirdLife Youth Chapter. A version of this commentary first appeared in iLizwi, a student publication in Stellenbosch, South Africa.

The post The Achilles Heel of Conservation – There is a ceiling in conservation science, particularly in Africa. appeared first on Conservation Frontlines.