The First-Ever PA Archery Bull Elk is a Monster

Posted in All Outdoor

2019 marks the first year Pennsylvania has had an archery hunting season for elk — and the first one taken was one heck of a trophy. They only issued five bull elk tags for the entire state, and one of those was put to good use on the first day of the hunt. 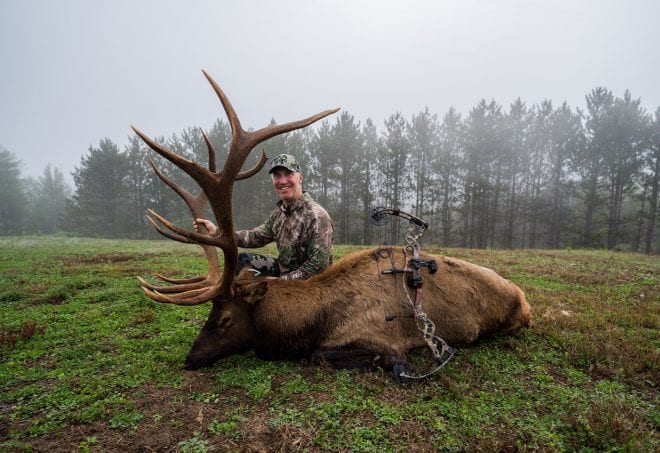 Pennsylvania hunting history was made over the weekend as the first-ever archery elk season opened on Saturday, Sept. 14. This year, there were five archery bull elk tags allocated. Jim Lickfeld was one of the fortunate hunters who had the opportunity to hunt this inaugural season. On the first evening of the season, Jim was able to take Pennsylvania’s first-ever archery bull with a perfectly-placed shot during the new season! He is pictured here with his 7×6 dark-antlered bull in Hunt Zone 10. Congratulations, Jim!

Jim was guided by Trophy Rack Lodge and World Champion Elk Caller Al Morris, who works for Pennsylvania-based company, FOXPRO. Tyler Hock from the Pennsylvania Game Commission’s marketing department was along and able to capture the whole hunt on film, which will be available in the future. Thank you to Jim for allowing the agency to document the hunt to share with current and future generations of Pennsylvania hunters.

We wish all our 2019 elk hunters, archery, general and late-season, the best for safe and successful hunts! While the elk hunting opportunities are exclusive in Pennsylvania, it’s an important component of maintaining a healthy and sustainable herd. We appreciate everyone who applied for an elk license this year. Thank you for your support and for being Pennsylvania hunters!

It’s one heck of a fine critter, that’s for sure. I have to wonder whether video of the hunt really was captured “on film,” which seems unlikely… but we know what they mean.

A quick perusal of their Facebook feed failed to turn up that video… bummer. But congrats to Jim for bagging the bull of a lifetime.

The post The First-Ever PA Archery Bull Elk is a Monster appeared first on AllOutdoor.com.