The many faces of the bushbuck

The bushbuck is a medium-sized antelope with variable coat colouration and markings, and as many as 29 subspecies being recognised on this basis. Many of these subspecies and races are seen by some as being geographical variations that do not warrant subspecific status. They have short, bushy tails that are dark above and white below, and rams carry short, almost straight horns with a slight spiral and a keel at front and back.

Rams tend to be darker than ewes. Rams in most populations have an erectile mane down the centre of the back, of variable length, which is raised during encounters with other rams, or when an individual feels threatened. The erection of the mane is often accompanied by a slow, stiff-legged walk during display. 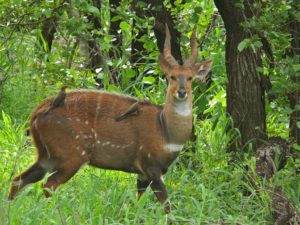 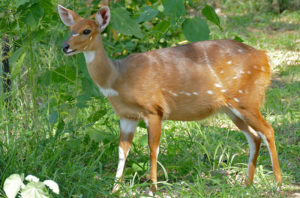 Northerly and westerly forms are the so-called “harnessed” group, chestnut to reddish with clear white markings. Eastern forms tend to be browner and most white lines broken down into a series of spots. Southern populations are darker brown but some, such as Chobe bushbuck, are brighter with numerous white spots on flanks. Pockets of differently coloured populations, such as almost black Menelik’s (T. s. meneliki) and Powell’s (T. s. powelli) of Ethiopia, can be found in specific locations.

Although distinct colour and pattern forms occur in different parts of its range, where these overlap the animals readily interbreed and within any one population there is great variety of coat colouration and patterning. Animals from higher montane regions in East Africa and the Ethiopian Highlands are generally larger and darker than those occurring in surrounding lower lying areas. Southern and eastern populations now classified as Tragelaphus sylvaticus and northern and western animals as T. scriptus. 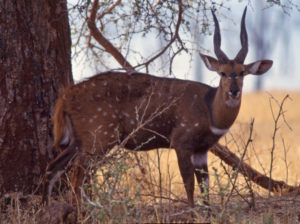 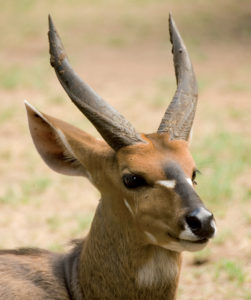 Most widely distributed of all the spiral-horned antelope, through much of sub-Saharan Africa, only absent from dense Congolean forest block and arid areas. Bushbuck find secondary growth very attractive for both cover and food. Offered as a trophy in most countries that allow hunting.

It is still common in many parts of its range.

Largely solitary, but pairs seen as well as loosely knit groups that may reach densities of more than 26 animals to 1km2 (247 acres). One study estimated 78 resident bushbuck in just 2.6km2 (642 acres). Home ranges overlap considerably, but each adult has its exclusive lying up spot. There may be some slight range adjustments in different seasons associated with water availability. Rams show no territoriality but develop dominance hierarchies by display, but on occasion serious fights occur. Dominant rams closely accompany oestrus ewes, but may be displaced by higher ranking rams in the area. Nocturnal but often active in undisturbed areas in early morning and late afternoon. Bushbuck rams are amongst the most courageous of horned mammals and if wounded or cornered they are potentially dangerous. There are numerous confirmed instances of rams attacking hunting dogs and human hunters under circumstances of stress. 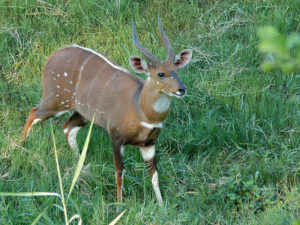