Help combat tick-borne diseases by supporting the population growth of the various critters that eat ticks.

All outdoorsmen and women are justifiably concerned about the spread of ticks and tick-borne diseases. Lyme disease is spreading at alarming rates. No one wants to contract it or any of the other serious diseases carried by ticks.

I recall a time when wood ticks and Rocky Mountain Fever were the primary tick-related concerns of sportsmen. Those days almost seem like pleasant nostalgia compared to today. Nowadays we also have tiny, almost imperceptible deer ticks. Who doesn’t hate those little vermin?

These days ticks carry a host of other diseases, including anaplasmosis, babesiosis, ehrlichiosis, the powassan virus, borrelia and tularemia.

Most of us take precautions whenever we head into the field. We tuck our long pants into our boots, spray our clothes with Permethrin, and constantly visually check for ticks. Still, many of us feel lucky and relieved when we come home from a trip into the great outdoors and find no ticks on our clothes or bodies.

The tick population seems to be exploding all across the country. The spread of Lyme disease is growing in the United States in spite of the warnings and precautions people take. So, what else can people do to combat the exploding tick problem?

Well, continuing to take precautions and especially visually checking for ticks and tick bites is the first preventative step. But we can also encourage the spread of animal partners in our battle. That is, we can directly or indirectly employ critters that eat ticks to help cut down on the number of ticks spreading across North America.

Ticks do have a number of natural predators, and if we can bolster the growth of these tick eaters then that is a very good thing to encourage. Here are a few of the most prominent domestic and wild critters that are worth their weight in gold in the battle against ticks.

If you live in either the city or a rural area and can raise certain types of poultry, it would certainly be worth considering to do so. I live in a city and used to raise ducks, and they kept the area around my vegetable garden squeaky clean of insect invaders, including ticks. Other friends had chickens and guinea fowl, and they had no problems with ticks on their property or in any adjacent fields or woodlots.

Guinea hens, an African-native embraced by American farmers, are tick-control machines. Forever wandering and pecking at any tiny insect pest–be it tick, slug, Japanese beetle or ant–they’ll keep any area they patrol insect-free. Of course they also eat beneficial insects, but that’s the price of pest control that also eliminates ticks.

So, if your city allows it,  build yourself a chicken coop and get some type of bird that’ll destroy any tick it sees. Of course you’ll also get the benefit of having farm-fresh eggs to consume. Be careful though, or your domestic feathered tick patrol might become well-loved pet birds.

Wild turkeys are another bird species that do serious damage to ticks whenever they find them. You can facilitate their growth by participating in Department of Fish and Game projects that enhance turkey habitat and by joining organizations such as the National Wild Turkey Federation. If you’re a turkey hunter you should be a member of this fine group regardless.

The monies that the NWTF brings in facilitate habitat enhancement projects, which help more than only wild turkeys. Many other species of tick-eating wild birds benefit from these projects as well.

While a number of small animals will eat ticks when and where they find them, opossums have been getting a lot of attention lately as supreme tick predators.

The problem with many other critters that eat ticks is that they also carry ticks. Squirrels, mice and other small rodents have been known to dine on insects, including ticks. But they’re also harbingers for spreading ticks, so the end results aren’t real great for these mammals as far as controlling ticks is concerned. 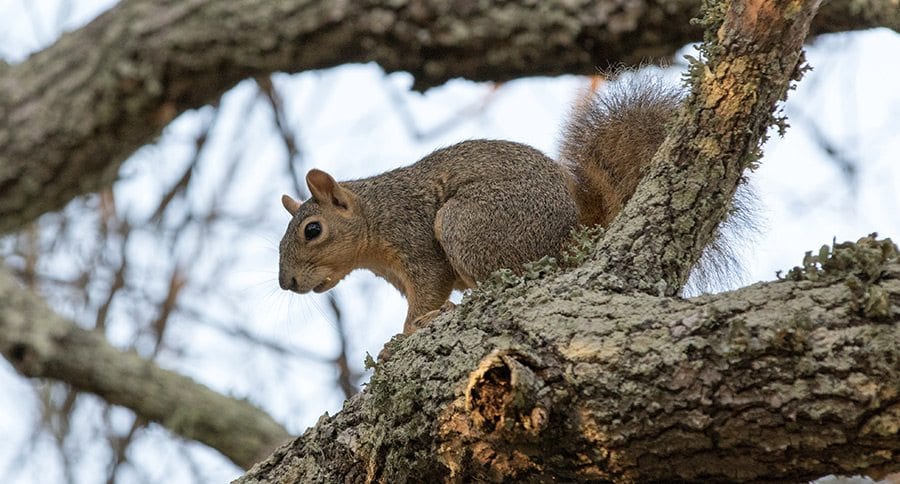 But opossums are a different story. Possums are, surprisingly, tick-killing experts. Scientists have discovered that possums groom themselves fastidiously, and while grooming, they lick and swallow every tick they find. This is no small thing. Possums pick up a lot of ticks in their travels, so in that sense, they too are carriers.

But the difference is that in the process of grooming themselves, upwards of 90 percent of the ticks that attach themselves to a possum wind up in their scat. In fact, possums are such efficient tick predators that in one season, they can kill around 5,000 ticks!

If ever there was a mammal that deserves a PR makeover, it’s the possum. Often maligned as carriers of rabies, possum were often destroyed whenever folks encountered them. If you can somehow encourage the population growth of possums, imagine what devastation they might bring to the local tick population.

More research is needed on these homely marsupials, to find ways to enhance their populations. But if you see one on the road please swerve to avoid hitting it if possible.

A final quick word on another tick predator, frogs and toads. These amphibians, along with lizards, are also quite adept at finding and eating ticks. There’s not a great deal you can do on a micro-level to enhance the populations of these animals, other than stream and waterway habitat improvement projects.

But I will say, whenever I go trout or smallmouth bass fishing on a stream bordered by tall grass (a favorite tick habitat), I’m always grateful when I see frogs at the water’s edge. Not only do frogs and toads help with mosquito control, but they’ll devour any tick within a sticky tongue’s reach.

Like what you see here? Experience more articles and photographs about the great outdoors at the Facebook page, Stumpjack Outdoors.

NEXT: WHAT TURKEY HUNTING MEANS TO ENVIRONMENTAL CONSERVATION

The post These Animals That Eat Ticks are Incredibly Beneficial to Outdoorsmen and Women appeared first on Wide Open Spaces.