Advice for trouble-free travel with firearms, and what to do when things go wrong.

Traveling with firearms complicates everything. Honestly, it’s becoming a pain in the posterior…I breathe a sigh of relief when I travel withouta gun case! However, with some exceptions, we still can travel with firearms. It’s pointless to try to list the exceptions, because they’re subject to change. Some airlines do not carry firearms. Some airports are best avoided, including London and New York! And here are some destinations where hunting is legal…but where it is impossible to bring in a firearm.

For me in recent years these have included Ghana, Liberia, and the Philippines…and even our own state of Hawaii (not impossible, but difficult). If you can’t bring a firearm, then the outfitter must provide one. More common, for simplicity and ease of travel, you choose to borrow or rent a firearm. This works all sorts of different ways. It is difficult for non-U.S. citizens to bring firearms into the United States We’ve had several Canadians join us for our Kansas whitetail hunts. We keep a couple of scoped right-handed rifles there as loaners…and a spare left-handed rifle for my southpaw buddy from Alberta, Derek Barnes.

Although it’s always more trouble, Donna and I both prefer to travel with our own firearms. In part this is because we’re both left-handed. Mostly it’s because, after all, I’m a gunwriter, and if I can’t bring my firearm then I’m going to lose out on potential “gun stories.” Also, I’m a gun guy, and any hunt is more satisfying if I can bring my concept of the “perfect tool.” 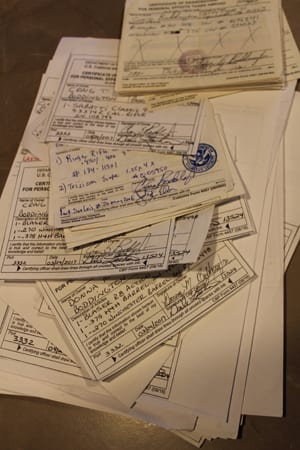 Don’t forget U.S. Customs From 4457, which serves as a U.S. “gun permit” in most countries, and is essential for returning with your firearm. Boddington has a huge stack for most firearms he’s ever owned, but these days they have an expiration date; you may need a new one.

So, despite extra trouble and more paperwork, I’m not afraid to travel with firearms. Let me give you the good and bad news. Good: I have some nice guns. None are extremely valuable, but some I consider irreplaceable. I travel with them and I don’t worry about it too much. Insurance is always a good idea, but I haven’t heard about a gun case being irretrievably lost in a long time. Anything is possible, but today it’s less likely because firearms almost universally receive special handling. Again, insurance is sensible, especially for valuable guns, but once the agent puts a bag tag on your gun case the airline accepts responsibility. In fifty years of traveling with firearms I have never have a gun case lost.

Which brings us to the bad news: Dozens of times I’ve had properly checked firearms delayed or “misplaced.” At least in my case they have always surfaced…but you never know exactly how long they might be delayed. Sometimes the airline can track missing bags and give you a pretty good idea that they’ll be in on the next flight or the next day. You wait and hope for the best. In remote destinations accurate tracking is unlikely, so you fill out the paperwork, pester the airlines, call your travel agent, and hope…but sooner or later, as your hunting days trickle past, you have little choice but to continue the hunt and implement Plan B, which is to borrow or rent whatever firearms are locally available.

This happens often enough that a very standard and routine question when booking any hunt should be: “Suppose my gun case is delayed, what (if anything) will be available?”

Even with the best planning, baggage can go astray. This can happen on short domestic flights, but the likelihood isn’t so much a matter of distance as number of connections. The more connections, the more likely Murphy’s Law will rule. Short connections are playing with fire, and risks are increased when you must switch from one airline to another (often unavoidable).

Of course, it doesn’t have to be the gun case! Any bag can be delayed or mis-routed. I’ve never been to Tahiti, but I’ve had checked bags sent there! You can usually borrow or buy suitable clothes, so the real key to continuing with the mission is to pack your carry-on as if your life and your trip depend on it: Medications, spare eyeglasses, comfortable shoes, camera, binocular.

Skip back t to my phrase “properly checked firearms.” These days, the horror stories are legion! All too often it’s a case of not knowing the rules. Just like a traffic stop, lack of knowledge of the law is no excuse. Occasionally the problem is a recalcitrant ticket agent who doesn’t know the rules. This is a tough one because, these days, we can’t argue with these people. Start with Step One: Make sure you know the rules. Step Two: Have all of yourpaperwork in order. Step Three: Be polite, ask for a supervisor, and get your travel agent on the phone!

Oh, you booked your own travel? Honest, when traveling with firearms this is often a major error. For domestic travel you can get information from the airline website, but you should always call the airline and tell them you are traveling with a gun case. For international travel with firearms you are best-served by going through a travel agent who specializes in or at least is knowledgeable about travel with firearms. There are quite a few, but agencies we have used in recent years include: Miriam Clingensmith at Frosch, www.miriam.clingensmith@frosch.com; Debbie Gracy at www.gracytravel.com; Steve Turner at www.travelwithguns.com; and Barbara Wollbrink at International Journeys, www.barb.intljourneys1@verizon.net.

The thing is, different airlines, especially international carriers, may have different rules. So do most international destinations…and some key airports. Amsterdam and Dubai are excellent hubs for onward travel to hunting destinations in both Africa and Asia, but both require local police clearance for travel with firearms, even in transit. A hunting-and-gun-savvy travel agent will help you through the paperwork…and provide an after-hours contact if you run into issues.

Here’s a (mostly self-inflicted) nightmare:  A buddy of mine just went on an ibex hunt in Turkey. He booked his own travel through Amsterdam, but didn’t do the police clearance. I have no idea how he got on the plane in the first place, but of course his gun case didn’t get past Amsterdam. They sent it back to his originating airport. Meantime, he went on to Turkey, but of course no gun. He called Miriam Clingensmith of Frosch in Houston, and somehow she got the airline to forward his gun case to Turkey, perhaps under the logic that they had tagged it. Anyway, he got his rifle…but by the time all this happened he had lost more than half his hunt and went home without an ibex (but with his gun case).

Here’s where our fast-changing world can throw a monkey wrench. Turkish hunters and outfitters have good firearms available. However, a new wrinkle in Turkish law renders it illegal to “loan” a firearm. So, instead of being able to borrow a firearm, my buddy had to sit on his hands waiting for his gun case to arrive while his hunt circled the drain. Istanbul is one of the easiest big airports in the world to transit with firearms, rivaling Frankfurt and Paris, and Turkey is not difficult for temporary permits. This “no loaning of firearms” is a new hurdle.

Most hunting destinations have a temporary firearms permit requirement. In three of the most popular—Canada, Namibia, and South Africa—you can apply upon arrival, and you can obtain the forms in advance (on-line, or from your outfitter, booking agent, and/or travel agent) and have them already filled out. Nice to have, because upon initial check-in, the ticket agent is supposed to ascertain that you can legally enter your country of destination (and pass through transit airports) with your firearm.

It’s just a matter of hitting all the wickets which, depending on the destination, may be simple or complex. Trust me, I don’t do this myself. Again, your outfitter, booking agent, and/or gun-savvy travel agent can and will help. Just make sure they transmit a copy of your destination temporary gun permit so you can show it to the ticket agent when you check in. The legend is that gun permits are horribly Draconian in the British Isles. Not really…you just have to follow the rules. We’ve taken firearms into England with no problems at all, but both Ireland and Scotland are simpler. In 2018 we hunted in both countries. In Edinburgh and Dublin the airport police were friendly and helpful, interested in where we were going and what we were hunting. Our outfitters, Michael Grosse in Scotland and James Nolan in Ireland, had done their groundwork and we’d done our homework. We had our permits, and we had no trouble. So, the most important tenets of international travel with firearms are to know the rules, and make certain you have followed them! And then, try to have some kind of backup plan, just in case.