The pronghorn antelope is fast, wily, and has eyes like a hawk. Here are some pronghorn facts for hunters and everyday sportsmen alike.

The pronghorn antelope is the fastest land mammal in North America. In fact, it’s the fastest in the entire western hemisphere.

Sportsmen and women have been giving chase to these wily “speed goats” ever since they laid their eyes on one. They live in sage brush-filled areas of grasslands, prairies, and deserts meaning they can often be spotted from a great distance. But since their eyesight is so acute, they are quite difficult to approach.

This is one of the many reasons why good optics are important when hunting pronghorn, and why we need to broaden our understanding of what it means to “spot and stalk” a hoofed animal.

For rifle hunters, this necessitates a good quality firearm and top notch ammunition. For bowhunters, it is one of the biggest reasons why the venerable ground blind has become so popular. It’s significantly harder to approach a pronghorn; for either hunter, it can be a tough lesson in belly crawling, long shots, and terrain-reading.

Since it behooves the outdoor sportsmen to know his or her quarry, we’ll share some basic information about these critters and what makes them tick. No one is more detail oriented about game animals than hunters, so a species-by-species review never hurts. We’ll try to put an emphasis on how they live and what we can do to help them thrive in the long run. 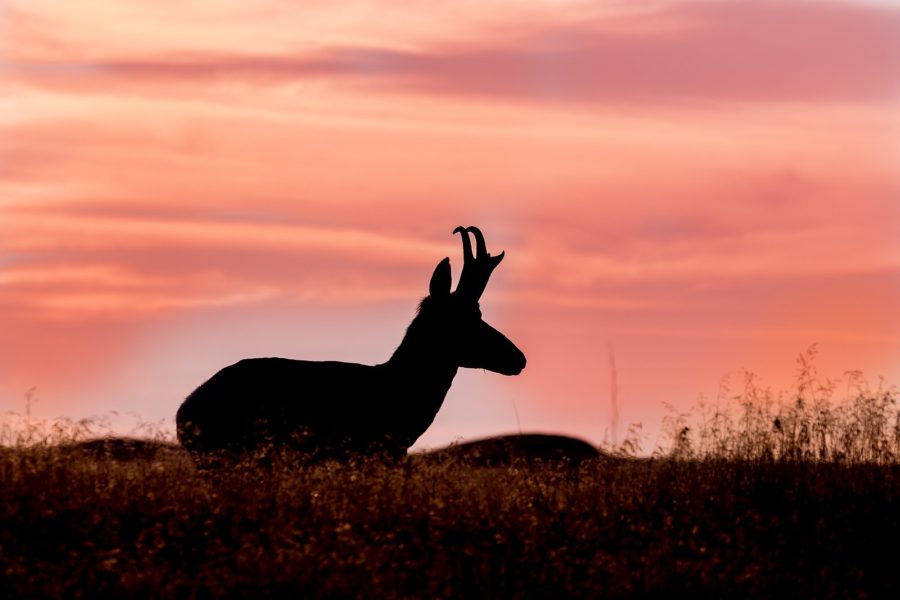 The pronghorn’s scientific name, Antilocapra americana, essentially means “American goat-antelope.” Nature Works reminds us that, though it is not an official, card-carrying member of the goat family, it is also not related to the antelopes found in Africa. The pronghorn is the only surviving member of the Antilocapridae family and it has established itself in North America for over a million years.

In some parts of the continent, they’re otherwise known as American antelope, prairie antelope, or prong buck.

The pronghorn antelope can be found from southern Saskatchewan and Alberta, Canada, to southeastern Oregon and southern Idaho, east to Montana and western North Dakota, and south to Arizona and western Texas.

Unlike deer, elk, or moose, the pronghorn has permanent horns as opposed to annually-shedded antlers. The horns do shed a sheath, or outer layer, each year. The forward-pointing tines of the horns, which give the antelope the namesake “prongs,” are a typical indicator of a mature animal. Horns can reach upwards of 20 inches tall.

Females have horns, but rarely do they include prongs. You can also tell males apart by their small patch of black hair at the angle of the mandible, just behind the bottom jawline.

Pronghorn are smaller than whitetail deer; they average between 90 and 120 pounds, while a mature whitetail can reach weights well over 200 pounds. They both share a similar dominant color of brownish-red, depending on the season. The pronghorn’s cheeks, rump, belly and chest are white.

The pronghorn lives in a hostile and barren environment. They are at home in the rolling prairies, arid deserts, and even coastal or mountainous terrain. The animals may face temperature ranges from well below zero to over a 100 degrees Fahrenheit and still thrive.

The range of the pronghorn extends from southern Saskatchewan and Alberta in Canada south through the United States. The NWF says, “Pronghorn are found only in North America. Their natural range extended from southern Canada to northern Mexico. Today pronghorn are mainly found in the United States in the Great Plains, Wyoming, Montana, northeast California, southeast Oregon, Nevada, Utah, Colorado, Arizona, and New Mexico.”

Pronghorn prefer open terrain and elevations that start around 1,000 feet, but they always stay within 3-4 miles of a healthy water source. Perhaps the healthiest populations reside in Wyoming in the red desert and Yellowstone regions.

How Fast is the Pronghorn? 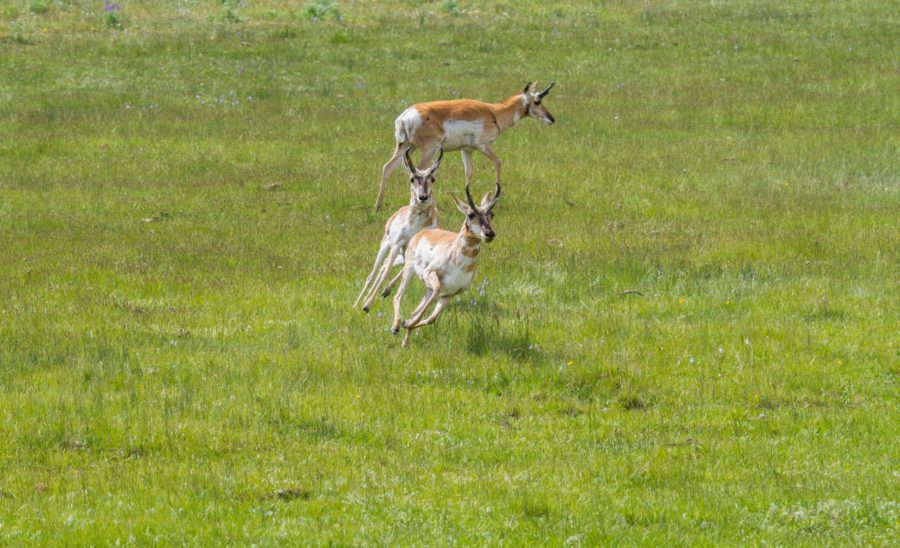 Though varying speeds are listed among reputable sources, many agree that pronghorn can run at speeds of up to 60 miles per hour. It can run long distances at speeds of 30-40 miles per hour. These animals have a huge lung capacity and keep their mouths open while they sprint which may be another adaptation. It’s enough to earn them the title of the second-fastest land mammal currently on Earth, right behind the African cheetah.

According to the Natural Resources Conservation Service of Montana, “Pronghorns existed in North America at the same time as predators like the dire wolf, saber-toothed cat, and American cheetah, all of which are long extinct. Scientists believe the pronghorn’s excellent vision and extreme fleetness are adaptations to survive these super predators.”

Where they exist together, wolves, coyotes, bobcats, and cougars are the remaining major predators of pronghorns. Even golden eagles have been reported to prey on both fawns and adults alike.

Pronghorn antelopes generally breed in September with an eight-week gestation period, giving birth to one or two fawns around the beginning of June. Fawns are virtually odorless at birth which helps protect them from predators. Does will graze away from where she has hidden her fawns so that predators are less likely to find them.

As a big game hunting target, this one-of-a-kind native North American species is one many of us have come to know and love. The American pronghorn is one of the only animals of its kind that can attain the high speeds of the hoofed animals, and as hunters, sometimes you only get to see the pronghorn herd and their white rumps running away from you at high speeds.

In reality, it’s part of what makes them so alluring. They can have a strong musty smell, and their meat is debatably good or bad, depending on who you speak with. Like most venison and wild game meat, if you care for and prepare it properly, it can be plenty satisfying.

It can also be satisfying when a pronghorn hunt comes together, and shows success in a unique, unpredictable way. That’s often the case, which again, helps make these such an interesting game animal.