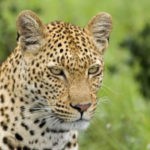 On 2 May 2021, South Africa’s Minister for Environment, Forestry and Fisheries, Barbara Creecy, made public a massive report of 582 pages compiled by a so-called ‘High-Level Panel’, containing 18 goals and 60 recommendations. Most strategic planners will tell you that having too many goals is a sure recipe for failure to achieve any of them.

It is called ‘The high-level panel of experts for the review of policies, legislation and practices on matters of elephant, lion, leopard and rhinoceros management, breeding, hunting, trade and handling. For submission to the Minister of Environment, Forestry and Fisheries – 15 December 2020.’

The media have picked up as the main message of the report that South Africa plans to ban the so-called ‘canned hunting’ of lions in South Africa, a practice that has resulted in widespread condemnation from many quarters, including most hunting organisations and from the majority of hunters themselves.

A Colloquium on Captive Lion Breeding by the then-Portfolio Committee on Environmental Affairs was held in August 2018. This was attended by a range of national and international organisations who gave evidence to the Committee. According to the report of the Portfolio Committee, which was later adopted by Parliament, there was a predominant view that the captive lion breeding industry did not contribute to conservation and was doing damage to South Africa’s conservation and tourism reputation.

The Portfolio Committee, therefore, requested the Department, as a matter of urgency, to initiate a policy and legislative review with a view to putting an end to this practice. Given that there were a number of other burning issues related to other iconic species such as rhino (escalating poaching, rhino horn trade), elephant (ivory trade), and leopard (threats such as illegal offtake of damage causing leopards, poorly managed trophy hunting, trade in leopard skin for religious and traditional use) the Department decided to include these in the terms of reference of the Panel in order to get a holistic view of the pertinent issues.

The Minister established the High Level Panel (HLP) on 10 October 2019, in terms of Section 3A of the National Environmental Management Act 107 of 1998 (NEMA). The Panel was chaired by Ms Pamela Yako, and comprised 25 members from a range of backgrounds and areas of expertise.

The report is extremely long and will require some serious reading and analysis before the full implications of its recommendations can be made. It remains to be seen whether any of the 18 goals can be achieved, given the complicated nature of South African society, let alone the diversity of views about the environment and conservation. The views of animal rights proponents seem to be scattered throughout the report. Some idealistic philosophical threads run through the report, like this:

“To provide this aspirational horizon against which to reference our thinking, we identified the following consensus ‘working vision’:

‘Responsible’ and ‘sustainable’ sound like appropriate words for the wildlife sector to aim for, but what is meant by ‘vibrant’, ‘inclusive’ and ‘transformed’ in this context? Given that the ANC government seems intent on implementing a new land policy of ‘expropriation without compensation’, what does this mean for the privately-owned wildlife ranches and game farms on which much of South Africa’s hunting activities take place?

The HLP identified seven cross-cutting themes within which they could frame the issues of concern that needed to be dealt with as part of its Terms of Reference (ToR), and for which the members would need a deeper understanding to inform their recommendations, namely: The Constitutional framework; Legislation and mandates; Land-use and the South African wildlife model; Transformation in the sector; Education and capacity building; International position, and Animal welfare.

Seven sub-committees developed situation reports for each theme, which identified key issues of concern, as well as providing different ‘lenses’ from which to view the specific issues raised for each species within the ToR. It is no wonder that their report is so lengthy! The Executive summary is five pages long. Let’s skim through its 18 areas of concern to the HLP:

So, there is much to think about in this massive report, and already there are noises from rhino breeders that their rights are seriously infringed by the recommendations here. Most of us will support the notion of phasing our canned lion hunting, but what is to be done with the large population of captive lions, and the people whose livelihoods are sustained by the practice? What usually happens when you ban the trade in any commodity, is that it goes underground and becomes the domain of criminals and corrupt officials. That has already happened with rhino horn, and will surely be the case with lion bones. The HLP report is not very helpful in these two cases.

But the underlying support for hunting is welcomed, as it is expressed in recommendation 11:

“South Africa to be repositioned and promoted as a destination of choice for legal, regulated and responsible hunting of the five iconic species, recognising that this supports and promotes conservation and rural livelihoods.”