The common eland is ox-like in appearance, especially in the case of bulls. Older bulls develop a large dewlap on the throat and most have distinctive mat of fairly long, coarse dark hair on the forehead. A short dark mane runs down the back of the neck of both bull and cow. Both carry shallowly spiralled horns, with those of the bull being more robust and distinctly ridged along their length. Coat colour is fawn, or tawny, with forequarters usually turning blue-grey with age. Southern populations rarely have white body markings but Livingstone’s and eastern races have variable levels of narrow, white, vertical lines on the sides. They have large, rounded, cow-like hooves. Recent taxonomic thinking now places both eland species in their own genus Taurotragus, replacing Tragelaphus.

Widely in southern Africa, extending eastwards through Zambia, much of East Africa to Sudan’s Boma Plateau and the adjacent south-western Ethiopia. Huntable in South Africa, Namibia, Zimbabwe, Mozambique, Zambia and Tanzania. Livingstone’s eland occurs in a broad belt of miombo woodland to the north of the Cunene and Zambezi rivers, the Cape to the south of them.

About 100 000 – 150 000 common eland across their extensive range. Although common eland still occur widely they have been hunted to extinction, or near extinction, in many parts of their former range. In the past they were chased on horseback until exhausted and then shot. Successful domestication programmes for both milk and meat production have been undertaken in Russia and Zimbabwe, but in the latter country neglect resulted in the collapse of the exercise.

Most savanna and open woodland types, from low to high rainfall areas. Occur from sea level to high mountain areas, including to 5 000m (16 400 ft) on Mt. Kilimanjaro where they visit natural mineral licks.

Form herds averaging 25 to 60 animals but, at onset and through the rains, congregations of 1 000, or more, may be observed. These large groupings are of a temporary nature. Some populations are sedentary but they are highly nomadic in many parts of their range.

The more mobile populations are those that occur in lower rainfall habitats. Home ranges of mixed herds in one East African study covered an average 1 500 km2 (579 mi2), whereas adult bulls circulated within just 25 – 100 km2 (10 – 39 mi2). In one study it was found that bulls occupied only about one quarter of their home range during the dry season, in contrast to those of cows and their young that had larger home ranges. Year-round range of bulls averaged about 40km² (9 885 acres), whereas those of cows more than 200km² (49,420 acres). 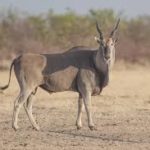 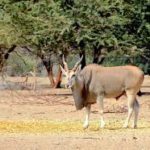 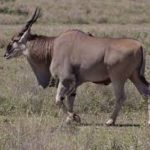 Depending on the range and type of habitats available bulls tend to favour more wooded areas, but cows show a preference for more open savanna. Bulls establish a dominance hierarchy which determines mating rights. Cows establish a dominance hierarchy which controls such things as feeding sites. Eland are active by both day and night, whilst during summer they become largely nocturnal in some areas.

Browsers but they will take grass, as well as fruits, wild cucumbers and will dig for roots and bulbs.