The Black wildebeest (Connochaetes gnou) is sometimes referenced to as the white-tailed gnu.  Its average weight runs between 250-425 pounds, and shoulder height is four feet.  The overall length 65 inches to 90 inches.  The black wildebeest has a dark brown to black coat with a rather incongruous white tail. Males are darker than females.  Both sexes have forward-curving horns up to 30 inches long with the female’s being shorter but similar in shape to the that of the male. 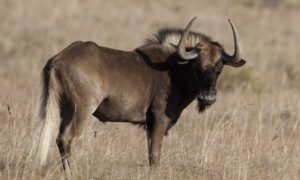 It is a herbivore, existing almost exclusively on grass.  It needs to drink daily, but can survive if water is scarce.  They are active during the early morning hours and after the heat has gone out of the day.  They are capable of speeds up to fifty miles per hour.  Life expectancy is 20 to 22 years in the wild.  They are prey to lion, hyena, Cape hunting dog, leopard, cheetah, and crocodile, the latter especially during the wildebeest migration when the animal is forced to cross rivers.  Crocodiles wait for a sick, old, or young black wildebeest to cross, then rise out of the water and drag the unfortunate animal under.  Lions hunt the mature black wildebeest, while calves are hunted by hyenas.

Black wildebeest belong to one of three distinct groups.  The male herds consist of young males, or those past the breeding age.  The female herd consists of adult females with their calves.  Then there are the mature males who establish their own territory and maintain it throughout the year.  Males become sexually mature at three years of age, females at one or two years.  They breed yearly.

A dominant male will control a number of females and not allow other males to breed with them.  Gestation lasts eight and one half months on the average, with births taking place from mid-November to the first week of January.  The calves weigh about 25 pounds at birth.  They are able to stand and run shortly after birth – necessary for survival. 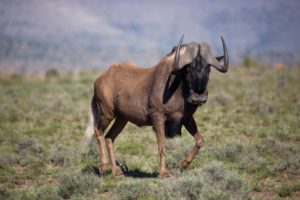 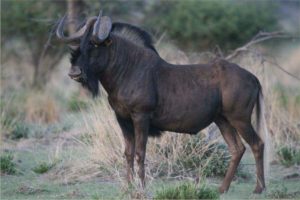 Wildebeest hunting at first glance looks fairly simple.  The animal, sometimes nicknamed “the poor man’s Cape buffalo”, lives on the open plains in vast herds.  Easy to locate, he is anything but easy to stalk.  As the hunter tries to close with the black wildebeest, the animal will turn and run in the opposite direction.  Sometimes it will run but a short distance, then stop and look back.  Sometimes the black wildebeest will run, jump, gyrate, spin, and leap into the air seemingly all at once.  Sometimes it will do all this for no discernible reason whatsoever.

Expect shots to be long, up to 250-300 yards, unless the lie of the land allows stalking closer.  Look for a fold in the land, or some trees that will give some cover.  Some success has been seen by approaching the black wildebeest at an angle, not looking directly at the animal, and seeming to walk parallel while actually closing.

Determining sex when hunting the black wildebeest will require good optics as the female and male are very similar.  Males have heavier horns than the females.  Rely on your Professional Hunter for advice.  Using shooting sticks helps when shooting black wildebeest at distances.

Choice of caliber is very important for two reasons, distance, and toughness of the animal.  They can be dangerous when wounded.  Minimum caliber should be a .270-7mm with a premium 150-grain bullet.  A better choice would be any of the .300 Magnum – .338 Magnum family of cartridges, with a bullet weight between 180 grains and 225 grains.

The blue wildebeest (Connochaetes taurinus), also known as the white-bearded wildebeest, common wildebeest, or brindled gnu, is one of the two species of wildebeest.  It is a herbivore primarily consuming short grasses, and is widely spread over Angola, Kenya, Mozambique, South Africa, Botswana, and Tanzania.  It was extinct in Namibia but is being reintroduced with success.  Also, private game farms and conservancies are breeding the blue wildebeest.

The blue wildebeest is an extremely wary animal, prone to leaping about and running around when even slightly disturbed.  Males are considerably larger than females and can weigh up to 600 pounds and stand five feet tall.  Females seldom weigh over 500 pounds, but occasionally can go as high as 550 pounds.  They breed at the end of the rainy season and give birth eight and one half months later.  When the calf is about eight months old, it will leave its mother and join a juvenile herd.

Mature blue wildebeest have a brown, or silver-gray coat with black manes.  Both sexes have horns, the male’s being larger and heavier than that of the female.  Herds average 25-50 animals, sometimes more in open grasslands.  They are tough animals and seen in company with zebras, impala, and hartebeest.  They need to water twice a day, so tend to stay near a good supply.  Average life span in the wild is 19-20 years.

They are most active in the early morning and after the heat of the day has dropped in the late afternoon.  Blue wildebeest will gather at night in groups ranging from 10-20 up to thousands.  Their major predators are crocodiles, lions, and hyenas.  Also, packs of wild dogs can, and do take down the calves or infirm animals.

Males are very territorial, especially during the breeding season.  Blue wildebeest males become aggressive and excited as they compete for mating rights.  They make testosterone-driven displays towards other males, bellowing, snorting and locking horns with other competitors.  A male blue wildebeest neither eats, nor rests when a female is present in his territory. 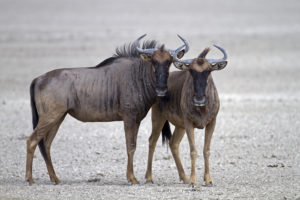 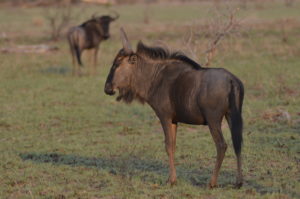 One of the most common methods of hunting the blue wildebeest on African plains is by walking and stalking.  Check the wind and start from downwind.  There will be many pairs of eyes watching for danger, including sharp-eyed zebras that have melded with the blue wildebeest.  Trying to move when eyes aren’t watching is very challenging.  A method that usually works well is to never approach the blue wildebeest straight on.  Walk at an oblique angle never looking directly at the animals, but watching them out of the corner of your eye.  Move slowly and quietly.  Plan on taking a long shot.  Out to 200 yards, a good, flat-shooting .30 Magnum with premium 180-grain bullets works well.  However, blue wildebeest are tough animals, and should the shot not anchor the animal, longer range shooting will be necessary.  For that, a heavier bullet, .338 to .375 caliber isn’t overkill.  A wounded blue wildebeest can open distance in very short order.

Aim point on a broadside shot is along the back side of the front shoulder and one-third up from the bottom of the blue wildebeest’s body.  For head-on shots, place the bullet in the center of the body, a handspan up on the chest.  Don’t quit shooting until the animal is down.  A wounded blue wildebeest can be very dangerous.  Always approach the animal from the back and be ready to give it a finisher.  They can, and will, get up and charge.