True wilderness is getting harder to find on the Dark Continent.

Mentor, friend, and great hunter the late Jack Atcheson Sr. once said to me: “True wilderness is characterized by the absence of wildlife.” Atcheson was from Montana. As historical record, the Lewis and Clark expedition almost starved in what is now great elk country. Today, animal densities are much lower in wild places like the Bob Marshal Wilderness than in ranch lands. Perennial concentrations of wildlife are most likely to be found in areas where permanent water and year-around food can be found, which usually means the hand of man has been at work: Developed water sources and, often, agriculture.

This is an almost universal truth, and it certainly applies to Africa. If you want to see a lot of animals on a constant basis and rack up a big bag, then there are no places on Earth better than the well-manicured and often over-stocked game ranches of southern Africa. There is nothing at all wrong with these places or this approach, but don’t delude yourself that this is wild Africa or that, having savored the amazing bounty, you have experienced wild Africa. 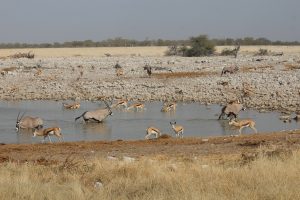 A typical scene at a waterhole in Etosha National Park, Namibia. If you want to see a lot of African wildlife—and you should—visit the great African Parks and enjoy, but don’t assume that typical hunting areas will hold such an abundance of wildlife.

Certainly, across the unimaginable vastness of Africa there are unusual areas that, by accidents of habitat, naturally host concentrations of wildlife. Many of these special areas have been preserved as National Parks, famous places such as Etosha, Kruger, Masai Mara, Ngorongoro, Serengeti. By long-established law and tradition, these are not hunting areas, no more than Yellowstone and Denali. There are parallels: If you want to view concentrations of North American wildlife in beautiful natural settings, visit our National Parks. Likewise, if you wish to view African wildlife in ideal habitat, visit the great Parks.

Naturally, many non-hunters don’t know the difference, and anti-hunters don’t want to know the difference. However, most hunting areas in wild Africa are marginal lands, often arid or swamp, unsuited for pasture and agriculture, and lacking the natural beauty and species diversity to be preserved as Parks supported by ecotourism. We crazy hunters are willing to visit such places because we’re willing to work harder for fewer encounters, savoring the wildness.

Obviously, “wilderness” is derivative of “wild.” In North America, large areas of more or less pristine wilderness have been set aside, with intrusion restricted, including use of mechanical devices, including vehicles and chainsaws. To be honest, true African wilderness is elusive. With Africa’s burgeoning human population, there are few areas (if any) that have noindigenous population. Human encroachment is forbidden in most National Parks (that are not hunted) and many game reserves (that are hunted), and even some hunting areas. For example, human habitation is forbidden in Zimbabwe’s Designated Safari Areas, set aside primarily for hunting.

Regardless of regulation and intent, almost universally there are roads, camps, and, business being business, there is almost always natural resource exploitation, such as logging, mining, and poaching. Absent some form of development, none of these things could exist—nor could lawful and well-managed hunting, or, for that matter, ecotourism. Thus, true, untouched African wilderness may not still exist. For sure I have never seen it. If it did exist, I probably couldn’t survive, pampered child of the West that I am. However, some areas are wilder than others!

Trying to be realistic in our twenty-first century, when I think of “wild Africa” I’m thinking of places where there are no fences, no major human development, and a minimal human population with inevitable agriculture and livestock. In such areas, wildlife can roam free as it must. Such areas exist all across Africa, and in fact are the norm in the majority of Africa’s twenty countries that currently offer regulated sport hunting. What I call the “roll call” of these African hunting countries is less than half of the nearly fifty sovereign nations that comprise Africa—and occupy less than a third of her land mass. Most African countries have National Parks vying for tourism. However, it is sad fact that wildlife has disappeared from vast tracts of Africa beyond these protected enclaves. The hunting countries are exceptions, with lands beyond sacrosanct Parks and reserves where wildlife still flourishes naturally because wildlife has value, generating revenues for both governments and local populations, brought in by sport hunting regulated as a sustainable harvest.

This is the reality of “wild Africa” today. Across Robert Ruark’s “MMBA” (Miles and Miles of Bloody Africa) situations vary widely, but animal densities are lower and conditions are more challenging than on intensively-managed private lands. That’s okay because we hunters don’t mind working for the experience. 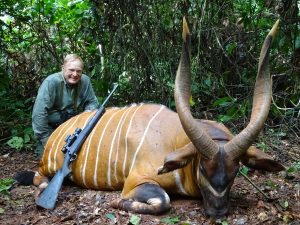 An amazing bongo from the Congo forest. This was the only animal taken on a two-week safari, and one of only a half-dozen actually seen. In the forest, this is normal, and it was a very successful safari!

I suppose the “wildest” part of Africa I’ve spent time in is the forest zone, where heat and thick vegetation combine to offer difficult hunting conditions. There’s actually a lot of wildlife in the forest—but you don’t see it! I know hunters who have encountered bongos on forest roads, but I haven’t! Last year, in Congo, driving hundreds of miles looking for tracks, I saw one bay duiker, brief glimpses of a couple of scampering Bates pygmy antelopes and a female sitatunga. That’s it! Hunting hard and specifically, my hunting partner and I each took a bongo, and we called the safari a resounding success.

The forest is a special case; one goes there with limited and specific objectives, hopefully understanding you won’t seea lot of game, and you’ll sweat buckets for every encounter. Much of today’s “wild Africa” hosts wildlife in significant density and variety—but that depends on wise stewardship. Today there are great hunting areas in Ethiopia, Mozambique, Tanzania, Uganda, Zambia, and Zimbabwe, to name just a few. However, these countries also have depleted areas, where effective anti-poaching has not been conducted, or where game quotas have been too liberal, or where human encroachment has not been managed.

In the past I have considered the presence of lions an essential element of wild Africa, so much that I used the phrase “where lions roar” as a book title. I haven’t exactly re-thought this, but hearing lions roar cannot be a part of every excellent safari experience. Lions aren’t creatures of the forest, and wild lions will not be encountered on the game ranches of southern Africa. Sadly, across Africa lions have vanished from much historic range. However, a wonderful part of the African experience is to lie in your tent and hear lions roaring. You are in wild Africa. The days are over when this sound might be heard across wild Africa, but I’ve had recent experiences that give me hope.

Coastal Mozambique has become one of my favorite African areas. Following Mozambique’s long civil war little wildlife remained. In the last quarter-century the outfitters operating the big Coutadas surrounding the Marromeu Reserve have brought it back! These areas are supported only by hunting revenue, and they have wrought a miracle: From 1,200 remnant buffaloes in 1992 to 30,000 today, along with thousands of waterbucks, sables, nyalas, and so much more. In the 1960s, lions were plentiful in the area. Although none have been hunted in years, the lions never made a comeback. Occasional wandering males came through, probably from Gorongosa National Park seventy miles inland—but there was no breeding population. Area operators agreed lions were needed to make the area complete. In summer 2018, just a year ago, twenty-four wild lions were brought in. Widely publicized, this was the largest international transfer of wild lions, engineered and funded by Mary Cabela and son, Dan, of the Cabela Family Foundation. Habituated in enclosures and then released on the edge of a game-rich floodplain, the lions almost immediately formed small prides and began making natural kills. 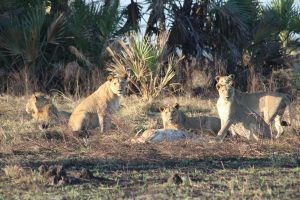 “Mary’s Lions,” snacking on a reedbuck just a few days after being released into the wild in Mozambique’s Coutada 11. For unknown reasons the area was lacking in lions, so the Cabela Foundation introduced two dozen lions. After just a year they have doubled!

I was there shortly after the release and watched a lioness snag a reedbuck. My cameraman, Bill Owens, had the amazing fortune to be there when one of those elusive Mozambican males claimed three lionesses. Now it’s a year later and I’m back in Coutada 11, site of the release, with Zambeze Delta Safaris. In just a year the initial two-dozen have doubled. So far “Mary’s Lions” are subsisting primarily on reedbuck, warthogs, and bushpigs, but before long it’s almost certain we’ll have to share the buffalo with the lions, and that’s just fine!

I’ve spent a lot of time in Namibia, a beautiful country offering a vast amount of game. Most of it is private land, and except for the Zambezi Region in the far north, not much of it is lion country or “wild Africa.” But an area I hadn’t seen until recently is Kaokoland in the northwest.

I was there in June with Jamy Traut and saw a side of Namibia I didn’t know existed. His Kaokoland concession encompasses two tribal conservancies, 1.6 million acres: No fences, a few small villages and a scattering of nomadic herdsmen, and a surprising amount of wildlife for such arid country: Lots of mountain zebra, plentiful springbok and giraffe, good kudu. Plus bonuses: Kaokoland is too arid to be buffalo habitat, but has a permanent population of several hundred wandering elephants, and a breeding population of black rhinos…very possibly the last completely free-roaming black rhinos on the African continent. And, yes, it’s lion country! The estimate is about a hundred and fifty lions in several prides, with individuals coming and going from Etosha to the east. We saw their tracks; they stole our leopard baits—and we lay in our tents and heard them roaring. By any and all definition, this remote corner of Namibia is wild Africa.